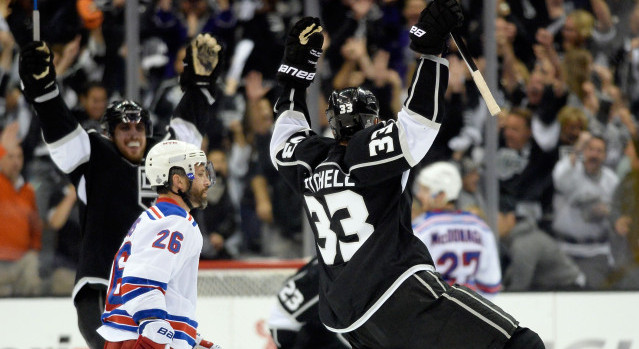 On the game-winning goal:
I think Kopi picked up a puck in the corner and read that maybe their strong side winner was pushed down a little bit and put it up to the point. As a defenseman in overtime, you’re just trying to get it down to the net. I didn’t think I could get it on the net, so I was just kind of shooting in traffic, and I think it went off Brownie and in, so we’ll take that, for sure.

On what was being said when the team was down two-nothing again:
That we’re going to rope-a-dope ‘em again. Fat chance – we’re not saying that, trust me. Quite honestly, we’re not happy with how we started these two games at all. It’s the Stanley Cup Final and you know everyone in this room cares so much. We haven’t executed. We haven’t executed well in the first half of the games. It baffles all of us in here. It’s not the place we want to be and to have to climb out of all the time. Sooner or later, it’s going to bite you in the ass. I guess that’s the great part about it, that we find a way to battle back, but we’ve got some work to do again. Give the Rangers credit, but we’ve got to execute much better than we have. [Reporter: I mean, that is Lundqvist in goal. Four-two in the third period.] World class goalie, and we’ve got one, too. You’re going to have to get a bounce off a player and in to beat one of these guys.

On defensemen facing challenges by forwards in the crease, and watching the McDonagh-King battle in front of Lundqvist:
I don’t know. I’m so engaged into my game out there it’s tough to watch everyone else’s stuff going on. It’s playoff hockey. You want to go to the net. You want to create traffic. You want to create what we call ‘noise’ there, and Hank plays deep in his net. If you can get some traffic and throw pucks to the net when a guy plays deep like that, sometimes you’re lucky enough to get one by a world-class goalie.

On how the approach changes in the second overtime:
Yeah, you shorten up your shifts, especially if you’re playing an off-side. You don’t want to get caught out there. If you’re in the D-zone you make one play. It’s usually you want to change up the ice. It’s not where you go down and have a scoring chance and then you’re still on the ice and getting caught out there. So you want to change moving up the ice. Yeah, get the gatorlytes in you and make sure nothing’s seizing up.

On whether last season was difficult for him, and being apart from the team:
Of course. We’ve all played hockey since we were kids and dream of playing in the Stanley Cup Final and winning the Stanley Cup. We have an awesome team around here, and when you’re not able to do that and you want to do that, it’s really out of your control because sometimes health is out of your control. Yeah, it’s tough. Personally, I just disconnected from it. I didn’t even really watch a lot of the playoff games, just because it’s like sticking a knife in you. So it’s nice to be back and be a part of this and just enjoy it.

On scoring in the second period and allowing a quick goal 11 seconds later:
Yeah, that’s one me and Quickie want to clean up. He left it, and the puck kind of squirted up. Being a veteran player, you go out for that shift and you’re like, ‘OK, big goal,’ because obviously it was clawing us back in the game. But you want to execute on a good shift after that, and then we didn’t. Yeah, like I said, those are the ones you don’t want to give up. When you claw back to make it a one-goal hockey game, and then you spread it to two again, so we need to clean that up.

On whether this playoff run is different because of last year:
I don’t know. They’re all enjoyable. Yeah, I guess maybe there’s a sense of satisfaction…I had a plan to get healthy and kind of relied on one of the best guys in the business as far as rehabs on knee. The guy, John Mayer, worked with Kobe. I stayed down here for the summer instead of going back home fishing like I normally do. When your plan works, you execute it well, and you come back, you’re healthy, you play a full season and you get to be a part of this? Yeah, sure, it feels darn good.