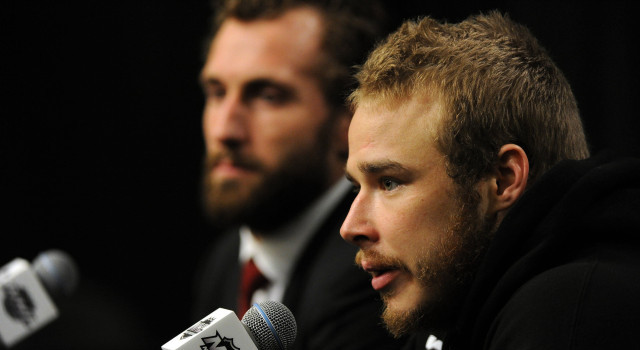 Dustin Brown, on the game-winning goal:
I think it started on the forecheck. I’m not sure what defenseman it was. I just kind of chipped it behind him and got it around him. I picked up the puck and I gave it to Mitch and just circled high, went around the net. I’m not sure what kind of happened in the high area there. I went to the net and kind of skated away from the net as he was shooting. I got a piece of it.

Brown, on any concern over the team’s starts:
I’m not really that concerned because I understand that we can’t do it, but I also understand the type of guys we have in our room. I know we’ve been through a lot of emotional ups and downs. Again, I’m confident in our group, that we can sort it out and figure it out. We’re all well aware of what Stolly just said. In saying that, we’re also aware of the type of team we are, how good we can be. It’s just a matter of resetting, reloading and dialing it in for Game 3.

Brown, on whether Jonathan Quick “deserved better”:
Some of the goals, especially the first goal, he had zero chance on. Stolly had a good lane on it, it went through his legs somehow, found its way in the net. They had a few goals where Quicky didn’t have a chance. We tie the game, he makes a save on Brassard.

Brown, on any satisfaction that his style of play culminates in a double overtime win:
I think probably ‘satisfy’ is not the right word for the first two games. I think the way we play, everyone is talking about how we come back. I think it’s more how we turn the tide of the game over the course of the game. We’re not worried about scoring the game-winning goal. We’re worried about just playing our game, grinding away. It starts with one. That’s what our mentality is. Whether we’re down two, up two, the situation doesn’t change for us. Where we have faltered is at the start of games, the last three games really. The mentality of our team is very black and white. We’ve been missing that in the first period. Again, in saying that, our mentality, it allows us to stay in games and to kind of turn the tide over the course of the game, has allowed us to come back. We have to get back to it at the start of games.

Brown, on the mental and physical challenges of playing so many overtimes:
I think overtime games, it’s an extension of our normal game. When you are able to play six defensemen, four lines, it goes a long way in games where you go into multiple overtimes. The other side of that is we don’t rely on one guy or any two, three guys. We have a team that each night, I mean, if you look at it over the course of these playoffs, we found big games from different players each night. We share the workload which makes it a lot easier collectively on us as a team. Again, short shifts, being able to use 20 players, 19 players, goes a long way.

Brown, on what Willie Mitchell has meant to this playoff run:
Mitch, we missed him last year, him being out. It changed the dynamic of the back end. Where I think he makes a very big difference obviously is his defensive coverage, PK. He’s very hard to play against down low. You know, tonight you get an added bonus with him making a difference on the offensive side of the puck. His bread and butter is down low and PK.

Brown, on the team’s mentality not changing when leading or trailing:
I mean, that again is part of our so-called mentality. We’re not focused on the end result. We’re worried about our next shift. If you want to break it down even further, it goes to an individual getting ready for the games, doing what you need to do, taking care of your job. It’s one of those things we’re down 2-0, we’re down 4-2. We’ve been down a lot in the playoffs and we’re not focused on tying the game or winning the game. We’re focused on our next shift. You know what, that next shift might be a defensive zone shift where you need to grind it out. We don’t try to tie the game in one shift or come back in one shift, we just play our game. When we do that, we find ways to score big goals. Again, big saves allowed us to stay in the game tonight.

Jarret Stoll, on the team’s confidence in these situations:
I guess you look at the results, but we shouldn’t because it’s the way we play. Are we playing good or are we not? Right now we’re doing a lot of things that aren’t in our game, haven’t been in our game for years here. We’re getting away with it I think right now. Don’t get me wrong, we did a lot of good things to come back. Down 2-0, down 4-2. Resiliency to come back and battle and push and pull everybody into it, battle for that tying goal and the winning goal again. It’s just how we’re playing. We’ve got to be honest with how we’re playing. We know we’ve got more.

Stoll, on whether Jonathan Quick “deserved better:
It’s a game of mistakes. We made some mistakes on those goals, they’re in our net. You’re not going to blame your goalie. They made some mistakes that made it into their net. I’m sure that’s what they’ll say.

Stoll, on whether Brown defines what the team “is about”:
Well, we all know what type of player he is. It’s pretty black and white. Hard, physical, leads by his play. You know, big part of our team, huge part of our team. No other guy should have the C on his jersey, that’s for sure. Big goals, big plays. He does it all.

Stoll, on whether he’s reminded of the Anaheim series when the team didn’t play its best but led two-nothing:
Yeah, I think so. It’s good teams. They’re in the Stanley Cup Final. They went through a lot. They’re a good team. We never expected this to be an easy series or a short series. It’s going to be a long series. It’s going to be a very tough series. There’s a lot of momentum swings within a series, within a game, obviously. Yeah, I think it’s similar to that. But, you know, maybe totally different, too, in a way, different teams, different scenarios. We’ve just got to keep pushing and throw our best game at them in Game 3. That hasn’t been there yet. We have to go in MSG and have a simple, smart, physical road game, grind it out again, do whatever it takes to win a game. We’ve put ourselves in that situation a lot in the last two months. We’ve just got to win a game. It’s no different again going into Game 3. We’ll be ready to go.