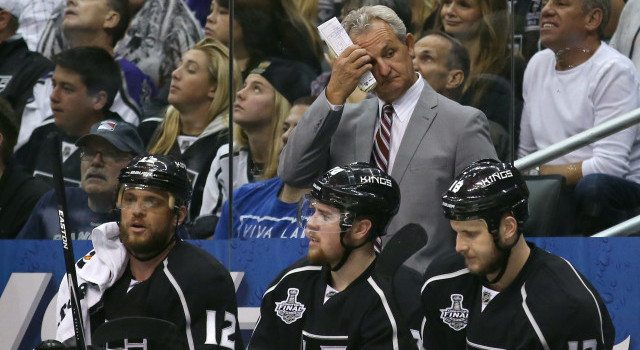 On whether Game 1 was a “vulnerable game”:
Yep. Obviously with the turnaround, guys are not machines. It was an emotional series against Chicago, and Game 7. You know, you play seven games, you’re actually playing three overtime periods in there, so when you add that in there, you’re close to eight games when it’s all said and done. It was tough, and then we got home in the middle of the night and had the whole media day and had to practice in the afternoon, which is not their normal schedule. Hopefully this’ll recharge us a little bit.

On references by the players that Los Angeles was surprised by New York’s speed:
We’ve talked lots about it, but you still have to engage in it. It’s interesting – the two teams, when you do it, we played each other early in the year and then, I believe, the middle of November, how many changes there have been. So that is an adjustment, too. There was quite a few different players in both lineups last night, and then you go to the next step, and you go to Game 1 of the Stanley Cup Final, and I know with our team, everybody talks because we won the Cup in ’12, but there were a lot of guys playing in their first Stanley Cup Final last night, first game on our team. I believe there was five or six, and that’s a lot. I think that could’ve been an issue early, too.

On the team’s resilience:
Well, you can’t chase leads all the time. It’s the National Hockey League. It’s the best team in the world. There are two teams left out of 30, which means that they’ve both come a long ways, and they both had to be resilient. You don’t get any award for ‘resilient.’ So we can play a lot better, and it’s way better when you’re not chasing the lead.

On whether Mike Richards has been challenged in adjusting to his new role:
I don’t think it’s very hard at all when you have a good relationship with the players, and you’ve had a track record of winning with those players, and that player has a track record of winning, and for sure understanding what a role is. Basically, he just wins. So he’s had to accept roles. It doesn’t matter if you think if he’s a first line centerman or a second line centerman. The reward for somebody like Mike Richards in all this is just winning. He’s all set. It’s just winning again, that’s all.

On whether it’s a challenge for a goalie to stay sharp after not facing a shot for an extended period:
You’d have to ask Jonathan . I think he stays pretty focused. He gets over to the bench during timeouts. He’s as involved in the game as guys that are jumping over every three shifts. I’ve never seen that as an issue, but goaltenders always tell you than when they don’t get a lot of work and they’ve got to make big saves that it affects them a little, but I think that he’s such a focused guy that I don’t think that really has a big bearing on that.

On the two biggest American cities vying for the Stanley Cup Final:
I live in Manhattan Beach here, not Los Angeles, and everybody knows what’s going on with the Kings, and that’s pretty cool because it’s a small town…atmosphere, and they know what’s going on. To be able to do it – and I said it when we played in Madison Square Garden earlier this year – it’s a special place to play. It’s not just a city, but Madison Square Garden’s a special place to play because it still has a personality. It’s not one of the generic buildings. It’ll be fun.

On whether injuries defensively impacted Drew Doughty’s progression last season:
I don’t think it had any effect on him. Willie Mitchell plays the left side, and Greener’s a totally different player than Drew. In fact, quite honest, you’re talking about last year. Our defense has changed a lot.

On a report that the Kings may soon be up for sale:
I didn’t know that.