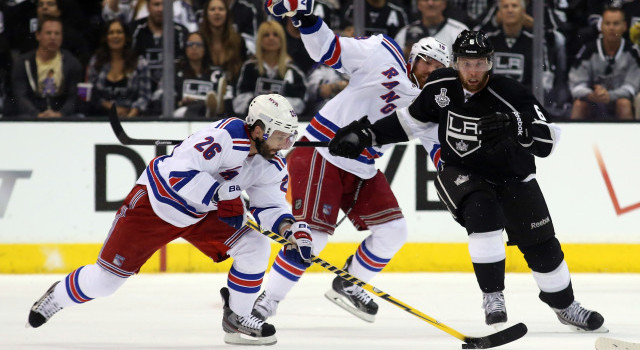 Alain Vigneault, on whether his team was able to set the pace in the game:
I don’t think we set the pace. I liked the way we played in the first two periods. I thought it was a hard-fought, you know, first 40 minutes by both teams. Not quite sure what happened there in the third. Not sure if it was them being that good or us stopping moving the puck and skating and going north/south. They definitely took it to us in the third and they were able to get a bounce on the winning goal and put it in the back of the net.

Vigneault, on whether Benoit Pouliot should have been in the defensive zone on the game-winning goal:
He thinks that’s an automatic play. The puck bounced over Dan’s stick. Not sure what he could do there. It was an unlucky bounce on our part, a fortunate bounce on their part. Couldn’t put the handle on it, I mean it was a bang-bang play. We were going north/south. We thought the puck was moving.

Vigneault, on the team not scoring more goals on some good scoring opportunities:
Well, could say the same thing for them. I think after 40 minutes both teams chance-wise maybe we were a little bit better in the first there. But it was a pretty close game. Could have been 2-1, 2-2 for either team. In the third, they just were the better team on the ice.

Vigneault, on what adjustments they will make for Game 2:
Let me look at the tape here. We have 48 hours to make some adjustments before we play Saturday. I’ll look at the game film and we’ll go from there.

Vigneault, on whether John Moore is in for Game 2:
Again, I haven’t talked about lineup decisions here as we move throughout the playoffs and I’m not going to start tonight.

Vigneault, on Carl Hagelin’s game:
Yeah, his speed shorthanded was definitely a positive factor for us. We just need to be able to generate the same thing five-on-five.

Vigneault, on Los Angeles’ physical play:
Well, they’re a good team. I mean, they come at you hard. When you make a play, you got to be willing to take the hit to make the play. That’s something we knew coming into the series. I thought for 40 minutes we handled it real well. Not quite sure what happened in the third there.

Vigneault, on whether they let Los Angeles off the hook:
I feel when you play against such a good opponent that has all that strength, you need to play a full game. For whatever reason tonight we just weren’t good enough in the third.

Vigneault, on Henrik Lundqvist’s performance:
I mean, he was the reason why we went to overtime. I mean, he gave us a chance. When you get to overtime, a lot of times it’s a bounce, it’s a shot. Tonight they got it.

Henrik Lundqvist, on the Game 1 loss:
It’s a fast game and it happens. It’s disappointing when you lose, especially when you’re that close. We had a really strong start to the game and then I think they started their push late in the first. Obviously in the third they had a lot of the puck but I felt like we kept them to the outside for the most part. It was a pretty fun game to play with a lot of action on both ends. It could’ve gone either way here. Unfortunately they got the first one here.

Martin St. Louis, on the game:
That’s a good hockey team on the other side. They’re going to force you to make mistakes; that’s hockey. There are two teams that are going for the same thing. We’ll correct the mistakes and get right back at it.