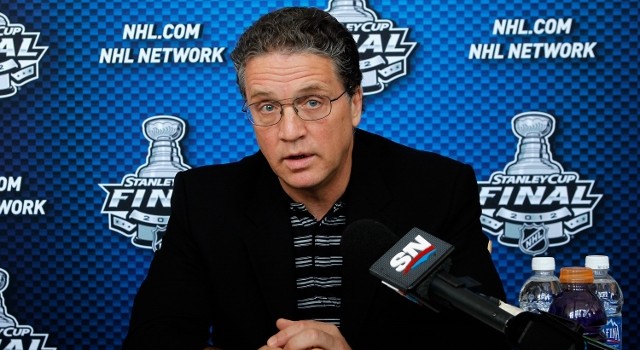 On whether Darryl Sutter’s personality rubs off on the players:
That goes without saying, and I don’t care what you’re in – sports, business, military – that’s part of being the leader, and it’s very clear what Darryl stands for. Regardless of his hockey knowledge – and put that all aside, because it’s second to none – but just what you hit on, the intestinal fortitude, staying even keel, staying focused, he sets the tone. The beauty about Darryl, though, as I’ve always said, despite that, he’s fully cognizant that players win and never loses sight that he can lead them and set the tone, but they have to execute, and I think the players in the end really appreciate that. And that’s just the truth. But in terms of what Darryl stands for, it’s very much part of what you see.

On whether he had any concern that Sutter’s “old school” approach wouldn’t fit:
I think I said at the time and I stand by it, it’s one of the easiest hires I ever made. It’s probably, obviously, one of the most critical decisions at the time for the franchise – and you guys know, we’ve talked about it before – the process of making a decision is arduous, whether it’s trading for a player, hiring a coach, hiring a scout, whatever. When I felt I had to make that change, that who…was the best fit, I just had no doubt. No decision is ironclad, but what I’m saying is I didn’t have to over analyze that one much. It was just what I knew about him. I think what gets lost here, again, as I’ve always said, the outward demeanor, or whatever the perception is, is so far removed on how much he is a player’s coach. Does it come out in a press conference or wherever? Probably not. I’ll always go back, too, to the day I hired him, that whatever people thought of it, the most important things to confirm my belief that this was the right way to go was how many texts I got from players who did play for him. Players, and players that he quote-unquote was probably hard on. So, this ‘old school’ thing? I think he was ahead of his time even when he was in Chicago because again, it comes down to the fact that he’s always been a player’s coach, and coaches today, it’s the ability to relate to them and still push them. It’s always been a part of his resume, so in some case, I think he was ahead of his time.

On the team’s resurgence in the San Jose series:
We knew it was going to be a very tough series. I mean, that’s a very good team. We knew it was a tough building to play in, so we knew we were going to have our hands full. We certainly didn’t expect what we saw in the first two games. It would’ve been one thing at that time to say, OK, whatever, maybe the way you lost Game 3. But you’re watching those first two, and there were so many things that were uncharacteristic of us. Even when we had our eight-game losing streak, we didn’t have games like that. And your job is personnel, and you’re looking at this and saying, ‘Wait a minute.’ And I remember we went back after those games, I sat there with the pro scouts, and we’re saying, ‘OK, what are we seeing here? Why is this breaking down? Why is this happening?’ Things we hadn’t seen before. And obviously, our job is to look at the personnel. Are you skilled enough? Are you fast enough? What’s going on? This is again where Darryl and those coaches, in those moments, they’re the ones who are on the front lines, and their ability to take what happened in those first two games, keep that presence, that level state of mind and actually coming in in the morning, and sitting down with them, just watching the tape, and they were divorced of any emotion, and it was clearly to say ‘What’s happening here?’ and is this that we’re not capable of it, or we’re not doing what we’re capable of? And it was very clear in their mind we’re just not doing what we’re capable of here. We’ve got to get back to doing things the right way, and it completely took at that critical moment, I think it took the emotion out of it. And it was actually, like I said, we had all the personnel people here, and sure enough, we got back to playing our way, and fortunately it came out for us. That said, you certainly don’t like to put your back against the wall like that, particularly against a very good team, but you talk about critical moments though, in a franchise – this goes back to what you’re saying when you’re trying to build something for the long haul – that part of that process with having players young enough is to be able to draw on these experiences. And the fact of the matter is too, again, this goes back to what I was saying before. When we won the Cup, you’re not a target. Becoming a target is very different in the first win, and that’s why all those people will tell you often times the second one is [tougher] than the first. You hear most players from any sport talk about that that have been on teams that have won championships, and I get it. Because the opposition now has clearly got their ears in tune. You’re not speaking up on anybody. So that requires a different mindset of your players to adjust. Now that said, fortunately you have players in that room that have been through some of that – Justin Williams, the Carter and the Richards. So you had something to draw on, and then it just transferred to the rest of them. I think to answer your question, I don’t think it was the first two games. It was so out of character for us…you just say, ‘What’s going on here?’ But that’s where those coaches come in. I mean, Darryl and Johnny and Davis’ ability, they were – wow. And that translated to your players, and they’ll draw on that continually. Again, you look at this series. We were 16-4 when we won it. Last year you run into a Chicago, again, Stanley Cup champions, the first two games they said, ‘Here you go, boys,’ and we’re done in five games. Now all these challenges were very different. A team like San Jose – very good. Anaheim – best team in the league, and then you turn into the Stanley Cup champions. Very different mind sets and challenges than they had two years ago, and they’re figuring it out.