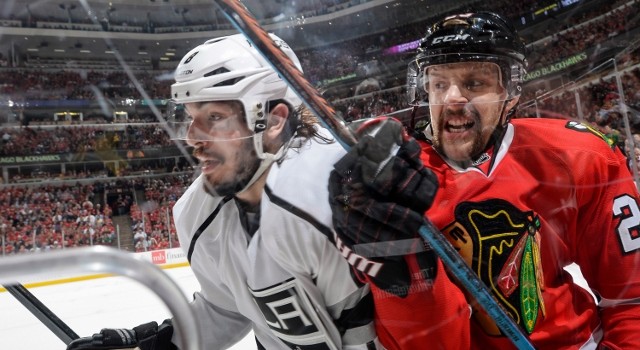 On the Game 5 loss:
It was a crappy loss and I’m not happy about that obviously. We would have liked to have closed it out tonight, but what can you do? We’re going back home and that’s where we’re comfortable. [Reporter: Was it a crappy loss because you gave up so many goals?] Yeah, for sure and the start we had was awful. Bad start and just losing in overtime, that stings a lot. Knowing we could have had it so many times. We had the lead going into the third, which you can’t ask for much more than that. To give up a goal like that so early into the third, was a little bit of a dagger. We had opportunities to win tonight, we just didn’t do the job.

On the quality of the play improving in the third period and the overtime periods:
Maybe both teams were just a little too anxious. Maybe trying to do a little too much off the beginning and that was causing guys to be a little sloppy. But after that, I thought both teams played well. It was chances going back and forth. Once again, we don’t want to be in that situation because they usually capitalize on their chances as we saw tonight. It was a good hockey game, but not a hockey game we want to lose.

On whether the loss may affect their play in the next game:
It’s going to hurt a little bit tonight, but tomorrow is a new day. We’re going to be back home sleeping in our own beds, where we’re going to be comfortable and we’re ready to close it out at Staples.

On playing nearly 40 minutes in the game:
I felt really good out there. I felt fresh. I wasn’t tired at all. I obviously wish I could’ve done something to win the game for us, but I thought I played well. [Reporter: Is it all adrenaline at that point?] Yeah, I’m tired now obviously. I will probably take a nap on the plane. The more I can be out there, the better I like it. I thought it was a good game, but we just have to win.

On getting his shots through:
I was finding the puck and space and I was able to go end to end about 10 times and get shots off that way. The power play was getting some good looks. I should have scored tonight. I had so many opportunities and I felt really good. When I’m feeling good, I have to score.