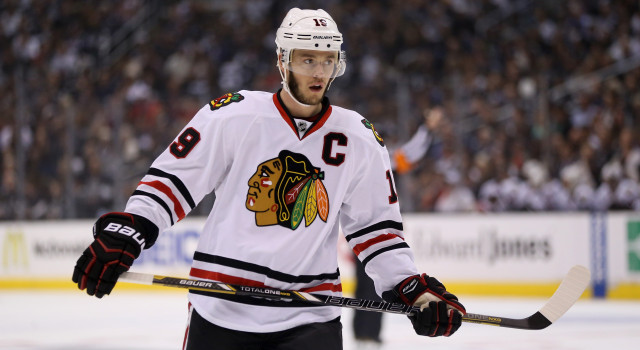 Patrick Kane, on being on the brink of elimination:
We were in the same position last year. You can look back at that and say we came out. We were successful. So why can’t we do it again? It’s tough in the position we’re in now. But at the same time, we still feel good about our team in here and we all know that we’ve done it before. We have to have that confidence of trying to win the next game and see what happens.

Kane, on the game:
It was a tough start. When you get down 3-0, it’s tough to come back on the road. After that, we were obviously pressing. You’re trying to generate as much as you can. I thought we had some chances to get ourselves back in the game. Obviously it didn’t work out that way, but we’re still a confident group in here.

Kane, on whether special teams is a key factor in the series:
How can it not be? When you look at the stats, I think you can take a lot from just looking at the numbers.

Kane, on whether they are feeling frustrated:
No, it’s a good hockey team over there. You have to give them credit. They did their job here at home and won two and they stole one from us on the road. We have to go back home. We know our crowd is going to be into it for Game 5 and we’ll use all that excitement to try and get ourselves excited and come out with a good start in Game 5.

Kane, on whether the team is lacking confidence:
We know it’s there. We just need to find it. It doesn’t help when you get off to the start that we did tonight. But I still feel that we’re a confident group in here and when we play that way, we feel we can beat anyone.

Duncan Keith, on the penalty kill:
I don’t know. It just seems like somebody is scoring different goals on their power play in different ways. I think we can try and get clears when we have the puck. It’s just all the little things we talk about. If we just settle down a little bit out there, we’ll be fine.

Keith, on whether they can rely on their experience from coming back from a 3-1 deficit last year:
Like you said, we just have to win one hockey game. That’s what our focus will be. We’re excited to head back now and look at the positives knowing that we’re going to be back in our building. Just win one hockey game. I know it’s easier said than done, but I think we’re going to be excited to play that game back home.

Keith, on their confidence:
I think we saw what happened there towards the end of the game. We were able to score a goal and get some momentum. We’re a good team. It’s just we have to find a way when we get that lead to keep that lead and just go from there. Like I said, just take it one game at a time. We did it last season against Detroit. It’s not easy, but it wouldn’t be worth winning the Stanley Cup without going through adversity. I don’t think any team that gets this far or ends up winning it, goes through a playoff without having to deal with adversity. This is our chance to do it.

Jonathan Toews, on whether he is concerned about the power play:
We had some shots. We got some chances. It’s going to go in eventually. We’ll keep working at. The same goes with the rest of our game.

Toews, on their mindset heading into Game 5:
Just don’t look at the big picture. If you do, we obviously don’t like what we see. We just have to focus on the next game. We’re still alive in the series and there is no time to feel sorry for ourselves. Teams have come back in this situation before, even our team, even this group. That belief and that confidence has to be there and we just have to go do it. It’s not just one guy. It’s not just two guys. It has to be everybody. We’ll have a great start to Game 5 and get excited and just enjoy the moment and, like I said, get that energy and that swagger back.

Joel Quenneville, on whether he is frustrated with the amount of penalties his team is taking:
We didn’t take many penalties. I know we go to the net on the one play. We were on the power play and we nullified it. They get the second half of it and score, which was a tough one. We only took three penalties, so it wasn’t like we took a bunch. Over the course of a playoff game, two or three is probably generally the quota. We just have to find a way to get through the kill.

Quenneville, on their penalty kill over the last three games:
They’re shooting the puck…I thought maybe the first one, we could have gone up to the guy coming down the gut, kind of comparable to last game. But they’re shooting and they’re going in. The third goal of the game was a power play goal. So we have to be better in that.

Quenneville, on having experience overcoming a 3-1 deficit from last year:
Yeah, we obviously had a disappointing two games here. We’ll go back, just think the one game. We’ll get some momentum in Game 5. We’ve got to look at it like that with the comeback here. But that’s the thought process, don’t think of anything more than that. Let’s be excited about being at home and try to get the momentum back.

Quenneville, on whether his team needs to play with more confidence:
You look at the last two games, for 40 minutes we were doing the right things and the last 20 killed us. Tonight, the first period was the difference. Even though we started off decently, but we lost some momentum with our power play there. They scored early, which got them going. Certainly, when you’re playing with the lead or ahead in the series, there is a lot more confidence to our game. But I think we fought back in the second half of the game there and had some good looks and good zone time. It’s what to be excited about next game.

Quenneville, on special teams play:
Our special teams all year have been the strength of our team. Our first two series, our penalty killing might have been a reason why we won either series. Right now we’re going in against it. So we have to sure up that area. Our power play, our production has been off a little bit. I think we have to make sure that whether we’re scoring or not, we have to sustain and gather momentum when the power play is out there.