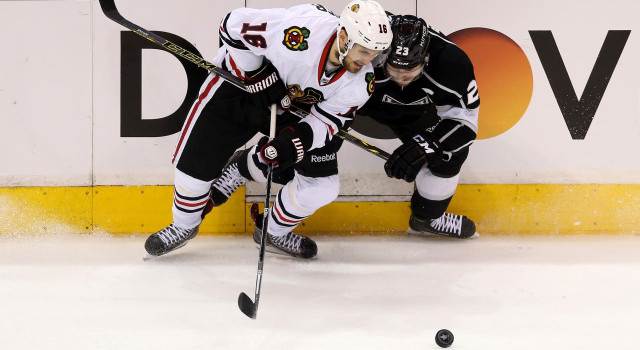 On the Game 3 win:
I thought our power play gained us momentum, they were both good but from a penalty kill standpoint we have to stop taking so many penalties because it’s hard work. Two to one series against the defending Stanley Cup Champs, I don’t think there’s taking control of a series. I think that both teams have shown that they are able to battle adversity. This is a team that was down last year and found a way to come back, so we did what we wanted tonight and got the lead in the series. Now it’s about resetting and reloading. We’re up in the series we have to keep going up.

On the team’s intensity:
The intensity is always there, I thought tonight was more of a grind. Powers plays and the penalty kills, we have guys that do both and so do they. It’s about managing the puck and staying fresh.

On leading the series two games to one:
I think it’s one of those situations where, like I said, we did what we wanted to do tonight. It’s about continuing on that. I don’t think anybody’s comfortable in this room with a two-one lead against the defending Stanley Cup champs. I mean, they’ve won two out of the last whatever-many years for a reason, and we’ve been in the Western Conference for a reason.

On “That 70’s Line”:
I mean, that’s what you need. I mean, Me and Kopi and Gabby haven’t produced on the offensive side of things, but I don’t think we haven’t contributed in positive ways. When you have multiple threats – and they’ve been our hottest line, probably dating back to the end of the Anaheim series – obviously, that’s what we need. But it’s good to see. Carts – it’s not a shock to see Carts score goals like he does. But those other two guys have come up and really stepped up their game and are playing at an elite level. Again, it’s about us just trying to get everyone to pitch in and find ways to help out.

On whether he is starting to detect a “championship gear” in this team:
At this time of year, it’s about your will. Like I said, we won two games. It’s about resetting and reloading. I mean, it’s a two-one series. We’ve done what we wanted to do in Game 3, and now it’s about Game 4. Again, we know who we’re playing and what they are capable of, so it’s about – not that it really is a problem with this group – staying even keel and getting ready to go for Game 4.