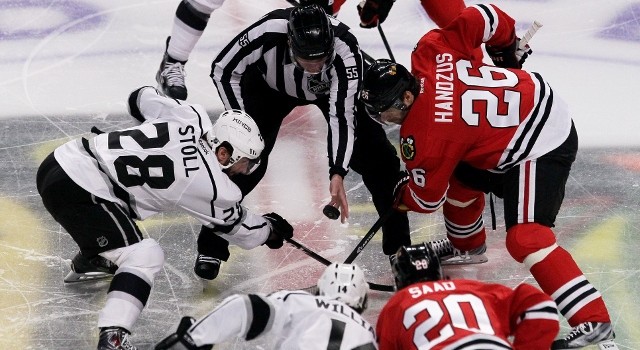 The Los Angeles Kings didn’t make a huge singular free agency splash in the 2007 off-season, though they did sign four players who enjoyed varying degrees of success with the team.

On the less productive end of the spectrum was Ladislav Nagy, who posted 26 points in 38 games but missed much of the season due to a neck injury. There was also defenseman Tom Preissing, who played 99 games over two years with the club, and forward Kyle Calder, who posted 47 points over 139 games between 2007 and 2009.

And then there was Michal Handzus, who developed into a specimen of hard-working, two-way consistency after a challenging first season in 2007-08 in which he barely cracked the 20-point barrier as the Kings finished in last place in the 15-team Western Conference.

Handzus appeared in 327 out of a possible 328 games with Los Angeles and remained the team until the expiration of his four-year contract. He signed with the San Jose Sharks in the 2011 off-season after posting 57 goals and 135 points with the Kings, and midway through last season was traded by San Jose to the Chicago Blackhawks.

A Stanley Cup winner with Chicago, Handzus said “it doesn’t surprise me at all” that the Kings have been able to sustain success over the last three seasons and spoke highly of his time with the club.

“It was fun. It was a lot of fun,” he said. “I thought, obviously, the first year wasn’t as much [fun]. I had a tough year, but after that I thought we were getting better, and the last two years we made the playoffs and it was starting to kind of turn around. Obviously, you lose in the first round, you’re not really happy about that, but I had a lot of fun with those guys. I remember they were very good in the locker room and they were a very good group of guys, and it shows now that they have success because of it because they’re very tight in a locker room. That goes a long way in the playoffs.”

By virtue of his style of play, it’s not surprising Handzus fit in well and remained with the Kings over the entirety of his contract. Those who played with him recall him fondly.

“He’s a great guy. He’s a great teammate,” Jarret Stoll said. “He’s very, very calm and relaxed. He just goes about his job and goes about his business, gets his body ready every day. He works a lot in the gym. He’s a special guy. I was very happy to see him win a cup a couple years ago and I texted him right away. Even in his 1,000th game this year, seeing his family and him on the ice was pretty special to see because he’s put a lot of hard work in and had some tough surgeries and had to come back from some tough things. It’s good to see Zus still playing, still playing well and being successful.”

Handzus will ll look to increase his scoring output after posting a four goals and 16 points in 59 regular season games. After a mid-season trade from San Jose last season, he was an unsung postseason performer with 11 points in 23 games. This year, he’s been skating alongside Brandon Saad and Patrick Kane in most even strength situations.

“You have to know where they are,” said Stoll, who has seen a heavy portion of time against the Saad-Handzus-Kane line. “You don’t want to give them too much space, it’ll hurt you. But you don’t want also want to be on their hip. There has to be a buffer zone there, otherwise they can spin off you pretty easily too. Starting with the puck is the main thing. We have to start with the puck as much as possible. If we can be 60, 65 percent on the night for a team, for our team, that’s kind of what we want. Make them work for it to get it back – and that’s the easiest way to start with the puck, obviously win the faceoff and get to our game before they get to theirs.” 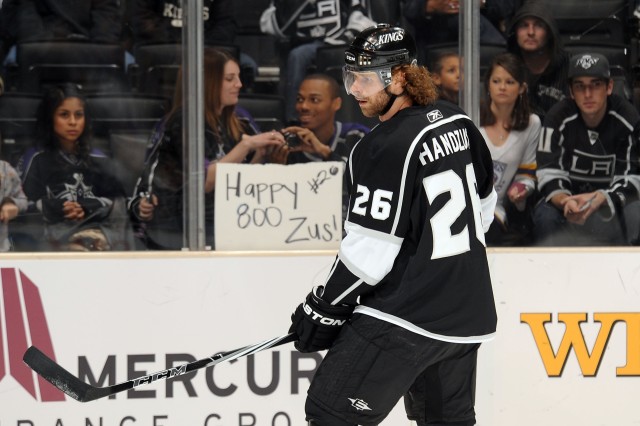 Stoll, on how the Kings expect the Blackhawks to respond in Game 3:
Having two days off and dealing with that for two days, you have to be ready for anything you can. There are no surprises. If there are surprises in the playoffs, that means you’re probably losing and you’re probably going to be out. You have to be ready for anything. Different pushes here and there and we definitely expect one from them in Game 3. But at the same time, we have to jump and get on these guys too. We want to win and take the lead in the series. It’s not going to be easy, we understand that. We got some confidence in Game 2 getting the win and we need to keep continuing to roll.

Stoll, on playing three of the next four games at home:
We haven’t been on the playing side too much in the playoffs here at home. We need to play well. We need to get wins. We just need everybody going, playing the right way. Play hard and disciplined, too many penalties last game. We maybe got fortunate and got away with it, penalty killing was really good. We can’t be in the box that many times.