How does Darryl address the team during intermissions? 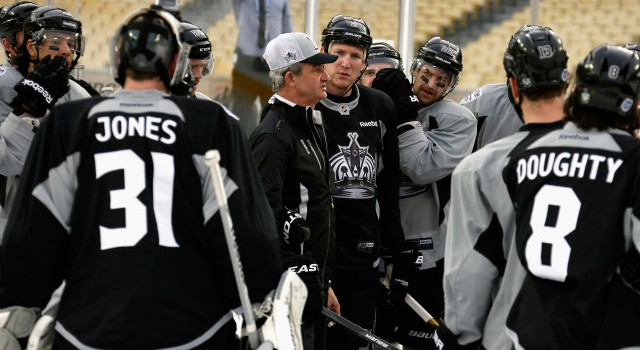 Drew Doughty offered an interesting and humnorous quote after last night’s game when asked how Darryl Sutter commands the room between periods. It’s certainly a relevant topic after the Kings trailed by a goal heading into the third period before erupting for five goals over the final 20 minutes as part of the fourth five-goal period in postseason club history.

“I don’t think he said too much, just because when Darryl doesn’t come in and say too much, that means he’s mad at us. That tells us we’re not playing well and we need to do something about it,” Doughty said after Game 2. “If he’s just staring at us in the room and making little comments like ‘Oh, Toews is the best player in the world’ or things like that, then we know he’s not happy and we need to do something about it.”

As Sutter clarified earlier today, he’s not one for boisterous emotional pleas. He’s not flipping tables, he’s not often screaming or swearing, and sometimes he’ll simply reinforce details to focus on or leave the room open for the players.

“Quite honest, you hear about all these big speeches that coaches make and all that. You know what? The players are getting the —- beat out of them,” he said. “They’re sweating and bleeding, and they don’t need, quite honest, all that. They don’t need some coach coming in there yelling and hollering. I don’t get that. That’s not me. I don’t do that. If theres;’ something to be said, I think it’s honest and the truth and you get it out. If it’s something that helps ‘em out during the game, that’s it. There’s not some great rallying cry between periods. You don’t get that far into the season – you trust what they’re doing. There’s that group of guys, and you trust what they’re doing. If you have to reinforce something, reinforce it. If not, stay out of their way.”

Not surprisingly, there’s not a regular salutary coating of positive reinforcement after the game, either. It’s more of the park-and-ride approach and a clear understanding of what needs to be done in order to find success in the future.

“Hey, we had to win in Chicago, otherwise we have no chance of winning the series. No chance. We had to win a game in Chicago,” Sutter said. “So at some point – and it’s a tough building to win in – and I think it was Jarret that said it yesterday. You have to win in tough buildings. If you’re not a division winner, then the other teams have the extra game at home, and we’ve already done that in this playoffs. San Jose – that was a tough rink. Anaheim was a tough rink. You don’t steal games in playoffs. You don’t .You can do it in the regular season because of the schedule or maybe lineups or something like that. But in playoffs you don’t steal games. There’s no tricks to it. It’s pretty much straight up, wait ‘til high noon and get out there.”