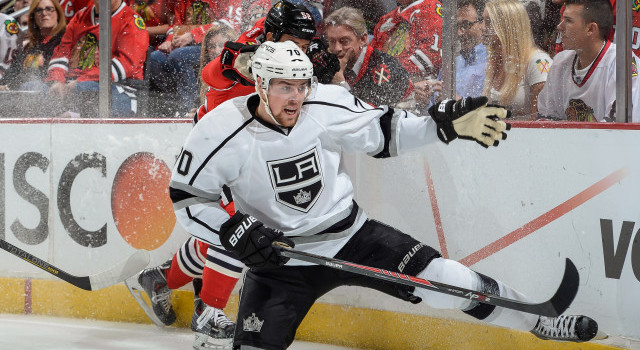 On whether this game was an example of the teams’ resiliency:
Yeah, last game we were down 2-1 going into the third. So we obviously didn’t want the same outcome, so we came out and got a couple goals and got the lead and tried to hold onto it.

On what changed in the third period:
I think we wanted to go back to our building tied up and not be down 2-0. We did everything we could and we just buried our chances. We didn’t last night, and tonight we did.

On Tyler Toffoli’s goal:
I just kind of saw Carts, I don’t think they knew where it was and I could see it because I was behind the play at the blue line when Carts shot it in. I saw it and I knew Toff was going to be in the slot somewhere, so I just passed it out there. Fortunately he was there and he put it in. [Reporter: You saw it the whole time? Did the puck pop straight up?] Yeah, I saw it the whole time when it was up which helped us out at the end of the day.

On whether it looked like they were out of the game:
It may have looked that way, but we got that nice one at the end of the second period that gave us some momentum going into the second [intermission.] Like I said before, we were down 2-0 in the last game going into third period, so we didn’t want the same outcome. We bared down on our chances today and it got us the win.

On the team’s ability to come back in games:
I don’t know. I’ve said over and over that these guys don’t like to lose and I think it just translates throughout the team. Everyone wants to move onto that next step and we’re doing everything we can to get that. And we’re fortunate enough to get a win in their building.