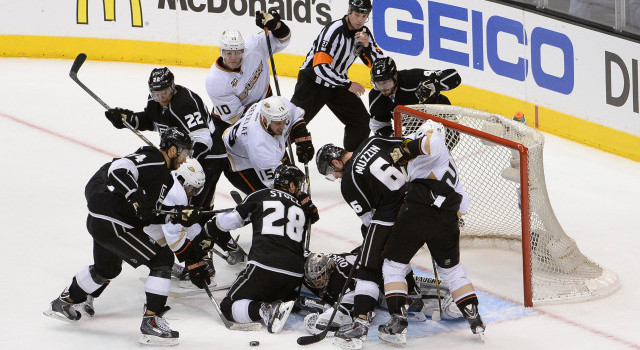 On “the difference” in Game 6:
From what? [Reporter: If anything.] The difference in anything, from- [Reporter: From the last game.] Pretty much the same game.

On luck being “a factor” in Game 7s, and how to manage it:
Luck? You can’t manage luck. And I’m not managing, I’m coaching.

On whether the approach for this Game 7 will differ from Game 7 against San Jose:
I think this one, because you’re another two weeks into it, it’s another level of team that you’re talking about. We’re going into a building against a team that finished 16 points ahead of it. You can talk all you want – there’s a big underdog going in against the number one seed in the Western Conference. [Reporter: Do you tell your guys that, too?] We talk about it all the time, about how much of an underdog we are.

On structure and intensity playing a factor in the execution of the penalty kill:
We’re in the playoffs. There’s a lot of intensity and there’s a lot of structure. This series, coming in tonight, I think the penalties – it’s exactly what you want. It’s three or less a game. So tonight they called a few more stick fouls, which I was surprised by because I don’t think either team does a lot of it. So tonight they called ‘em.

On the penalty kill:
Was it six, total, that we had to kill? [Reporters: Five.] It’s fatigue on your guys, because when you do it, if you kill it all, think about it, it’s almost half a period. So that’s a lot on probably six forwards and four defensemen, depending on who’s on the box.

On holding Ryan Getzlaf off the scoresheet:
I think if you look at it, just going back into the last game, the goal that the line scored, one was a turnover to Getzlaf, and then a lot of points on the power play. So when you talk about the penalty killing, that kept ‘em off, and they had great opportunities. Obviously Jonathan had to make three or four big ones.

On whether the “fans matter at all”:
Oh, I think we’ve both got great crowds. I mean, just think about it – if there was nobody here tonight and we had to play, it’s a big difference in front of almost 20,000 people and in front of nobody. The fans are very important in both buildings. The best part of it.

On why the team has played well in elimination games:
I think when you’re going into a playoff series, you’re facing elimination, when you think about it. Correct? Somebody’s going to be eliminated. Every time you take the first shift for Game 1, you’re facing elimination. [Reporter: Do you coach it that way – try and get them in that mental mindset, first shift Game 1, first shift Game 2?] This is our ninth series from our leadership group that they’ve played now together. They fully understand that they’ve won series and they’ve lost series, and they fully understand what it takes to win a game and the price you’ve got to play.

On Matt Greene’s performance:
I think he’s given his less experienced partner a lot of stability back there.