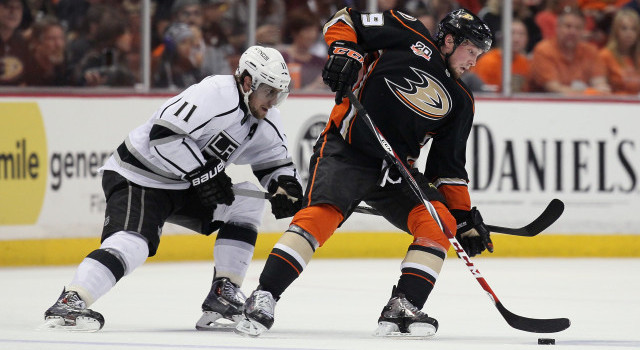 On whether the win was an example of the team’s resiliency:
It’s a playoff game. You’re into the second round. I don’t think you’re going to get teams that lay down.

On whether he found a spark by putting Carter with Kopitar and Gaborik:
Not really, it’s 2-1. I mean, it’s a pretty good hockey game with 10 minutes left in the third period, and they play together on the power play. Not really. Mike and Brownie and Willie have played lots together, and Stolly and Tanner and Tyler have. It wasn’t so much moving Jeff there. Hey, we were trying to tie the game up.

On whether there’s any update on Robyn Regehr:
No, other than he left the bench in the second period and did not return.

On whether Game 1 was what he had hoped to see from Marian Gaborik:
He played really good in the first round too, Cam. He scored three goals. They were big goals. He had a lot of good opportunities in the first round, and quite honest, he was a big reason that we won the first round, and also if he’d have finished some more opportunities, it probably would’ve only been six. If you look at both of those goals, those are classic goals. You’ve got to go to the net to score in the playoffs. You’re going to score a lot of goals around the net, not from the outside. It doesn’t matter if we pull the goalie. You still have got to go to the net, In overtime, obviously Kopi makes a great play to somebody going to the net. Not many guys can score those goals, but you’ve got to go there to score, for sure.

On the atmosphere Game 1 atmosphere:
It was awesome. You know what? It was what you expect. I think that’s what everybody wants. The building was great, and it was a physical game. I think the crowd really responded to that. It’ll be a good series, I hope.

On Jonathan Quick indicating that he wasn’t at his best:
Well, I’m glad he’s critiquing himself that way, because I thought he was pretty good. I thought he made a lot of big saves. He did a great job killing penalties, and he did a great job not giving up rebounds, which against this club, because there are four lines that can score. You’ve got your hands full. We need great goaltending.