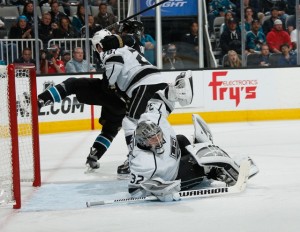 SAN JOSE, CA – APRIL 26: Logan Couture #39 of the San Jose Sharks battles for position against Jarret Stoll #28 and Jonathan Quick #32 of the Los Angeles Kings in Game Five of the First Round of the 2014 Stanley Cup Playoffs at SAP Center on April 26, 2014 in San Jose, California. (Photo by Don Smith/NHLI via Getty Images)

By Zach Dooley
390 Comments
Kings of the Podcast