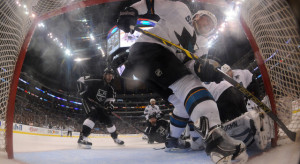 LOS ANGELES, CA – APRIL 28: Justin Williams #14 of the Los Angeles Kings scores the game-winning goal against Alex Stalock #32 and Matt Irwin #52 of the San Jose Sharks in Game Six of the First Round of the 2014 Stanley Cup Playoffs at Staples Center on April 28, 2014 in Los Angeles, California. (Photo by Noah Graham/NHLI via Getty Images)

By Zach Dooley
365 Comments
Behind the Scenes

By Zach Dooley
1,175 Comments
Kings of the Podcast