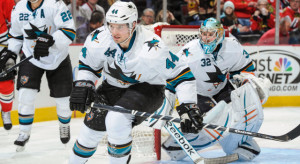 CHICAGO, IL – JANUARY 5: Marc-Edouard Vlasic #44 of the San Jose Sharks watches for the puck in front of teammate goalie Alex Stalock #32 during the NHL game against the Chicago Blackhawks on January 05, 2014 at the United Center in Chicago, Illinois. (Photo by Bill Smith/NHLI via Getty Images)

By Zach Dooley
922 Comments
Behind the Scenes