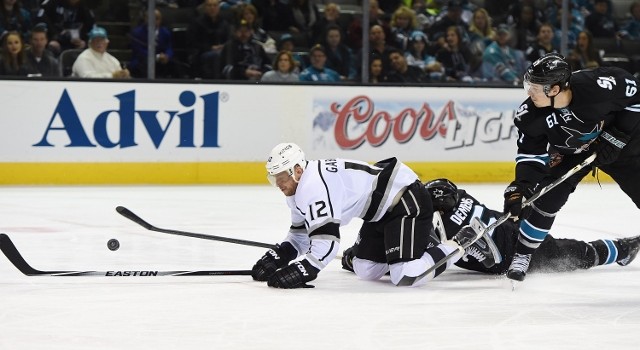 On whether he has noticed an upward trend in the team’s play:
Well, obviously we didn’t play very well in the first two games, other than parts of Game 2. We liked our game in Game 3. Unfortunately it’s based on who scores more, and we have to stay in a low-scoring series to have a chance to win a game. So that’s what we’ll try and do tomorrow.

On whether the team has played “[his] game”:
It’s not my game. I mean, I don’t play the game, and I don’t go out there and get punched and block shots and get pounded into the boards. Hey, we’re just trying to keep the series alive. We know what we’re up against, and either we will or we won’t. Last night has nothing to do with tomorrow. Maybe if they’d have won last night, we could say we played a hell of a game.

On the key to rebounding in this series:
Stay realistic. Don’t get too caught up in when somebody says you’re awful or if somebody says you’re great. We know what we are, and we just try and stay the course and try and get everybody to be accountable and be responsible with each other.

On how to maintain momentum in the series:
I think it’s an old, old story that you should just throw it in the fire and burn it. There’s momentum only during games. There’s no momentum during series because teams are too close. It’s now when you go from 30-to-16, 16 teams can win the Stanley Cup…and that’s how close it is. There’s no momentum from game-to-game. I was asked after the other game, it was like that we had some sort of big brouhaha everybody was talking about because it looked like it was a physical game. Well, it wasn’t a very physical game two games ago, and everybody was worried how that would affect last night’s game. Well, the clock stops, the clock starts, and it picks out from there.

On Marc-Edouard Vlasic missing practice in San Jose today:
We have enough guys banged up. I couldn’t care less about their players. I mean, we’ve gone through it the whole series, quite honest. So they’re talking about one guy now, it doesn’t bother us. If he’s in, he’s in. If he’s not, he’s not. We do it literally to game time, two or three of our guys every day. So I’m sure he’s a tough guy, and our guys are tough guys. That’s why they stay in the lineup. For sure.

On whether he’s superstitious:
I’m more of a timeline, routine-type of guy. [Reporter: I think a lot of the players are like that, too.] Yeah. And that probably goes back to that in some form, something back there. [Reporter: Walk out behind a certain guy, or whatever.] You know a lot of guys dress left-to-right. This much gear on, not this much gear on. It’s pretty neat, actually. Why? Ask me why. I don’t know why. Certain [things] at the same time, and you have to get in the lane at the right time. [Reporter: Are you still driving to the games by yourself?] Oh yeah…I’m not a guy who sleeps the day of the game or any of that stuff. It’s more quiet and being by yourself than anything.