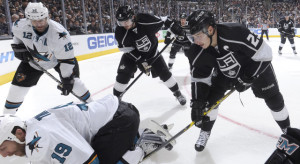 LOS ANGELES, CA – APRIL 24: Drew Doughty #8 and Dustin Brown #23 of the Los Angeles Kings attempt to gain procession of the puck under Joe Thornton #19 of the San Jose Sharks in Game Four of the First Round of the 2014 Stanley Cup Playoffs at STAPLES Center on April 24, 2014 in Los Angeles, California. (Photo by Juan Ocampo/NHLI via Getty Images)

By Zach Dooley
131 Comments
Behind the Scenes

By Zach Dooley
1,730 Comments
Off the Ice