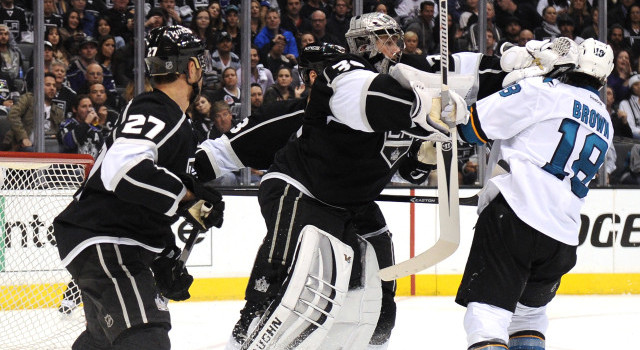 On Dustin Brown’s performance:
Well, I just think it was just important that Justin got his game on, too, so it wasn’t moving Dustin up somewhere. I mean, Dustin and Justin just switched centermen.

On whether Dustin Brown will be on the first line in Game 5:
With Jarret? Could be, yeah.

On building on the team’s performance in Game 3 and Game 4:
I don’t think there’s any momentum from game to game other than to try and play the same way. We played well enough to win tonight, and as I said after Game 2, we were a little better in Game 3 and not much different tonight.

On how he feels after the win:
I was thinking about I made a mistake myself of thinking about how we were going to win up there today. [Reporter: So you were pretty confident that it was going to go to five?] They’re two good hockey clubs. I think you even look at the first five minutes tonight, the Sharks took it to us big time. Jonathan aced it in the first few minutes, and then we scored. [Reporter: Darryl, when did that thought about going up there creep into your mind today?] Last night, actually. And why wouldn’t it? I know the sky’s falling when you lose a game, but we might never win a game ever again in Los Angeles. We might win every game until the middle of June. It’s the way it works, jeez.

On Tanner Pearson and Tyler Toffoli:
I thought they both played a hell of a game tonight. [Reporter: Was it a risk putting those guys up there on the second line?] Up where? [Reporter: On the second line and giving them an opportunity to play with Carter?] No.

On San Jose’s response in the third period:
It’s a good rivalry. That’s what it should be. [Reporter: is that good for maybe you guys even more to go into the next game with a little extra?] It doesn’t favor anybody. The clock stopped. The clock starts. Both teams know each other well enough.

Darryl Sutter, on the response he expects in Game 5:
We’re going into the cage. [Reporter: Do you like that?] Cages are a good thing.