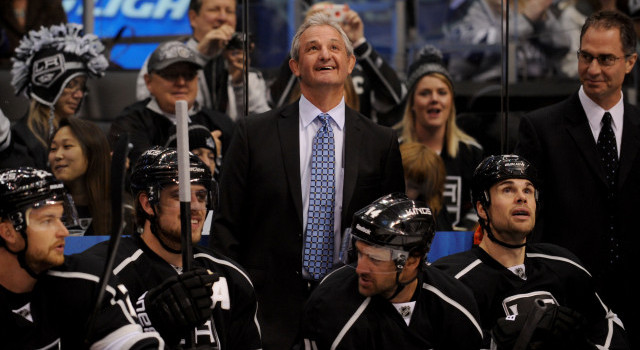 On when he gets an in-game sense of which players are playing well, and which aren’t:
Generally we know our team well enough. Most of these guys have been together, so you can pretty much tell right away.

On whether Los Angeles will utilize new line combinations:
Well, we’re in better position than we were last game to decide, anyways. Hopefully we can do it not after warm-up. [Reporter: In the sense of your back end, there, is in better shape?] Yeah. So it does help us.

On whether San Jose was challenging to prepare for because of lineup additions:
No, I think we were pretty sure. We had just played you guys a week before, and we knew Hertl was coming back and Raffi was close…You know what? I think Scotty Hannan got banged up a couple games [prior]. We knew their lineup, where they can slot guys. I mean, quite honest, for me looking at it, the biggest thing was whether Little Joe and Big Joe would play together.

On what Los Angeles expects from Colin Fraser:
Well, we know Colin Fraser. He’s been here for a number of years, so that’s what you expect. We know what kind of player he is. He’s been hurt, went down during the Olympic break and had a hand injury, so he was just getting back, so it’s better he’s here. I think Manch starts, the playoffs start down there, so we just thought it was better Linden was down there playing and Fras was ready to play here.

On whether a change of scenery will benefit Los Angeles:
Yeah, I think so, as long as you don’t take it for granted. You don’t get wins because you change scenery.

On the atmosphere inside Staples Center:
Well, we have great fans. It’s probably similar. Obviously San Jose is known as a loud building. Hopefully we can have that same energy in here. It’s been like that – they’re experienced at it here.

On Joe Pavelski as a third line center as opposed to a first line wing:
Well, quite honest, it puts a 40-goal scorer on a different line, which I think gets overlooked with San Jose if you do it by games. It’s not just him when you do it by goals or production this year. It sort of goes back to what Randy was saying. Production, games played – they’ve got a 40-goal scorer, three 30-goal scorers and a 20-goal scorer, and then Thornton, who’s got 60-something assists. You know what? There’s a lot of ammo over there, and if they move it around, it puts a little bit more pressure on other guys.