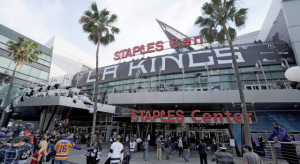 LOS ANGELES, CA – MAY 16: An exterior image of STAPLES Center prior to the start of Game Two of the Western Conference Semifinals between the Los Angeles Kings and the San Jose Sharks during the 2013 NHL Stanley Cup Playoffs at Staples Center on May 16, 2013 in Los Angeles, California. (Photo by Evan Gole/NHLI via Getty Images)

By Zach Dooley
939 Comments
Behind the Scenes