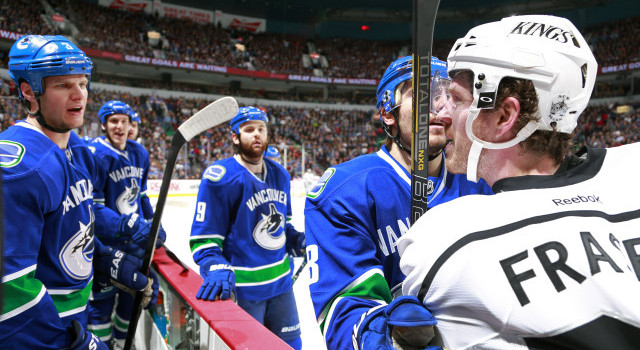 The Los Angeles Kings appear to be on the verge of making a center swap with AHL-Manchester, as first reported by LA Kings Insider. Earlier today the Kings assigned Linden Vey to the Monarchs and now appear to be set to recall center Colin Fraser. Though the Vey assignment has been announced by the team, the latter part of the transaction is not official.

Fraser, who was assigned to Manchester in mid-February, missed five weeks after breaking his hand blocking a shot in the third period of a 7-0 win over Bridgeport on March 14. He provided an assist in his return to the Monarchs lineup in season finale on April 18. In 10 AHL games, Fraser has three goals, six points and a plus-three rating.

With Los Angeles, Fraser recorded two assists and a minus-4 rating in 33 games. Given that Darryl Sutter has been critical of the play of the team’s role players through two games, it is certainly possible that he will be used in a familiar energy/pest-type role in Game 3 should his recall become official.

Vey has been recalled twice since April 3 but has not appeared in any games since March 1. He’ll join Manchester, who will open their best-of-five series against the Norfolk Admirals (AHL-Anaheim) with home games on Friday and Sunday in New Hampshire. An in depth AHL first round series preview will be posted later this week on LA Kings Insider.