Kings reject idea that the Sharks are under their skin 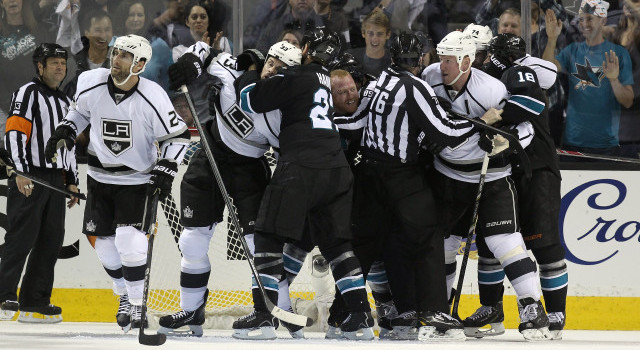 A little bit of bad blood simmered towards the end of Game 2, though it didn’t reach a boiling point, according to several members of the Kings who met with the media on Monday.

“We all knew it was going to be a physical series. Chippiness, it’s part of it,” Anze Kopitar said.

He rejected a question as to whether San Jose had gotten under Los Angeles’ skin.

The events in question occurred when 44 minutes of penalties were assessed at the 14:25 mark of the third period. The Sharks were leading 7-2 at the time.

Jarret Stoll also downplayed any standard of conduct that deviated from what traditionally spawns from highly competitive postseason hockey.

“No, that’s just playing the game,” he said. “Obviously we’re not happy losing. You don’t want to lose, whether it’s 2-1 or 7-2 Chicago’s down 0-2. We’re down 0-2. It’s the same difference. I don’t care what the score is. We’ve got to realize that we’ve got to play way better, and every one of us has to step up our game – myself included – on down the line. So if you don’t realize that, then you’ve got problems.”