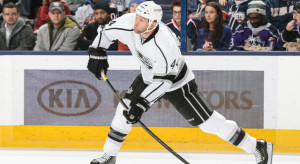 By Zach Dooley
411 Comments
Behind the Scenes

By Zach Dooley
1,733 Comments
Off the Ice