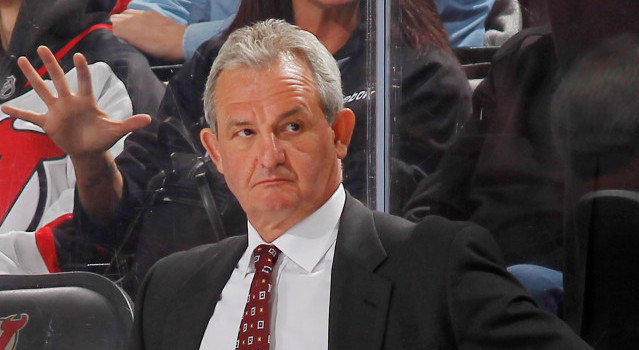 There is a formula to going deep in the playoffs, and it’s not a secret. Darryl Sutter revealed it to the media at Toyota Sports Center two years ago.

“Write it down and don’t forget it.”

I did! I actually wrote an article about it two years ago, but that article didn’t make it over in the FOXSportsWest.com redesign last year.

At the time, I called it Sutter’s Law. Looking back at recent Stanley Cup winners, it checks out.

Goaltenders. Corey Crawford, Jonathan Quick and Tim Thomas. The lowest save percentage of the three belonged to Crawford, who stopped 93.2% of the shots he faced in the 2013 Stanley Cup Playoffs.

Special teams. Interestingly, each of the last three Stanley Cup winners experienced a decrease in their power play rate between the regular season and the playoffs, and an increase in their penalty killing success.

Top Players. Patrick Sharp led all players in goals during the 2013 Stanley Cup Playoffs with 10, while Patrick Kane led the team in scoring, and Jonathan Toews (21:33) and Duncan Keith (27:37) absorbed heavy and productive minutes. Dustin Brown and Anze Kopitar averaged a point per game in the 2012 postseason, while the efforts of Mike Richards, Drew Doughty and Justin Williams were nearly equally as important in Los Angeles’ offensive surge. David Krejci, who has a knack for postseason production, led Boston in 2011 as Patrice Bergeron and Brad Marchand emerged in the postseason as some of the most difficult forwards to play against in the NHL.

Unsung Heroes. There is clearly one or two every season. From an offensive standpoint, that was Bryan Bickell above all others a season ago. The burly depth scorer had recorded a shade under half a point per game in 2012-13 before erupting for nine goals and 17 points in the playoffs – which includes seven points in five games against the Kings – and scored the late third period game-tying goal in the eventual Cup-clinching Game 6 in Boston. In 2012, rookie Dwight King ranked fourth on the Kings with five playoff goals, while Dustin Penner and Trevor Lewis provided important contributions, and key goals were scored by Colin Fraser, Brad Richardson and Jordan Nolan. In 2011, the Bruins banked on some added production from Chris Kelly, as well as from Marchand, who toed the line between top performer and unsung hero in the 2011 postseason.

Discipline. This criteria in Sutter’s Law may be the most difficult to define and not as weighty as several factors listed above, but there are certain teams – Detroit and Chicago are among them – that have a tendency to avoid taking penalties in both the regular season and the playoffs. It’s interesting, though, that in the 2011 Stanley Cup Playoffs that Vancouver averaged 17.4 penalty minutes per game, the highest average of any team that advanced past the first round. In nine games they were tasked with killing at least five penalties, and with an opportunity to claim the Stanley Cup in Game 6, they allowed two power play goals. In other news, there is no 2012 Stanley Cup Champions banner hanging at Rogers Arena.

Sutter’s Law isn’t discernible in a game-to-game basis early in the postseason, but it appears to hold true as trends develop over a wider swath of postseason action.

“There’s somebody that steps up and goes to another level or somebody that doesn’t, but it’s usually at the end when you call it a surprise or whatever that is,” Sutter said. “That’s usually what happens.”