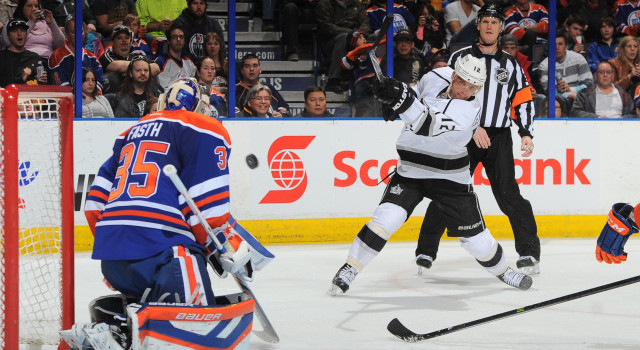 On being excited for the playoffs:
Of course I’m very excited. I always say that I’m very glad to be a part of this team. We have a good group here. I’m looking forward to it.

On what needs to be fine-tuned before the playoffs:
There are some things we need to tune up. Just to be ready at the start of games, but I think we will be. And we’re going to have a couple days… after this last game to prepare for San Jose and we’ll be ready.

On the team’s defensive performance in the third period:
We came out in the third period confident that we could pull this game off. Like I said, we controlled the game for pretty much the whole 60 minutes. We played our game. We played our game up and down and we didn’t give them much. Especially, we shut them down in the neutral zone. And if they did get some chances, Jonesy made some great saves.

On the team not taking a penalty in back-to-back games:
It’s kind of weird to have that, but I think we did it. We were disciplined. Hopefully we can keep it up as long as we can, going down the road. I don’t know if I’ve been a part of team where this happened.

On Anze Kopitar’s game:
I’ve mentioned before that he’s a top two-way player. He does it at both ends of the ice and he’s very smart. He just sees the ice very well and that’s how he is. He had a great game tonight and our line was going.