Greene, on getting cut: “It’s fine. It happens.” 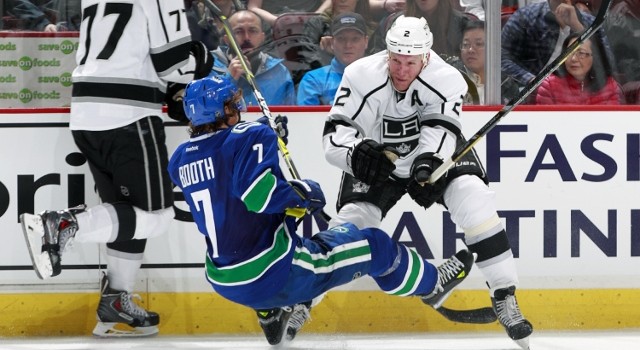 Blood was leaking out of the bottom of Matt Greene’s skate in the third period in Saturday night’s loss in Vancouver as a result of a shot that caught him at a pressure spot near his shin.

Matt Greene after being cut (blood coming out of skates) pic.twitter.com/VTbezIM9Gh

“I just got hit with a puck and just got cut. That’s’ it,” said Greene, who noted that it wasn’t the first time he had bled from a similar type of play.

The Kings have held leads going into the third period in three of their last four losses, dating back to March 17. Prior to that night’s loss to Phoenix, Los Angeles was 126-1-11 in its previous 138 games when entering the third period with a lead.

“Yeah, it’s frustrating. We have to start locking it down,” Greene said. “It’s two third periods here. We had a lead in San Jose the other night too and we just have to lock these down and go into the third period and win those games.”