King skates; injury “just a matter of wear and tear” 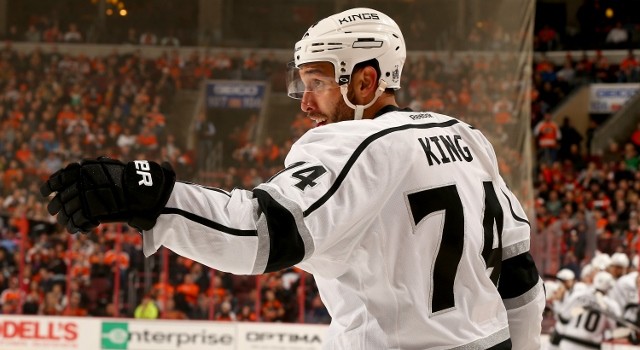 After missing Monday’s game with an undisclosed injury, Dwight King took the ice midway through Los Angeles’ practice on Tuesday and tested his ailment in the confines of the neutral zone.

“I was making progress. That’s the most important thing,” King said. “Obviously with the short amount of games left you want to be feeling good and going in the right direction come the end of the season.”

Though the injury is not considered to be serious, the left wing is not a lock to return to the lineup for the upcoming back-to-back set against Phoenix and in San Jose.

Jordan Nolan skated at King’s spot to the left of Jarret Stoll and Dustin Brown and took two shots on goal in 14:19 of ice time, his second highest accumulation of the season.

Dwight King, on whether the injury resulted from a particular play, or “accumulation”:
I think it was probably an accumulation. Obviously it did happen during the game, but it’s just a matter of wear and tear a little bit.

King, on frustration over missing twice after scoring twice last week:
It’s tough. Obviously I’ve been pretty fortunate this year to be unscathed. I mean, the good thing is we’ve still got time, and that’s the important thing.

King, on whether he would have played had Monday been a playoff game:
I mean, I wouldn’t really put that in perspective. Obviously it’s a little different. Right now it just wasn’t worth it.

King, on having the luxury of time in this position:
It’s nice. Obviously, like I said, it’s fortunate that we do have these two weeks still. That’s what I’m looking forward to to get myself ready to go.