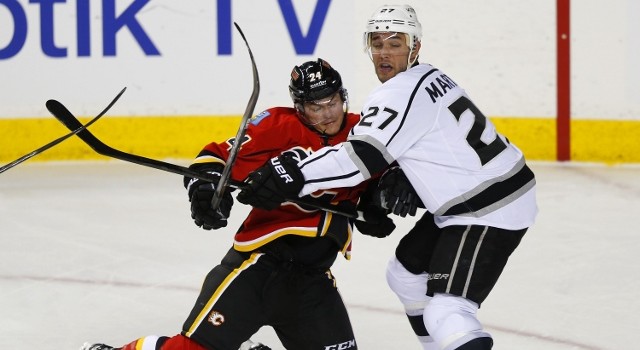 Throughout the team’s five-game winning streak and overall post-Olympic play, the Kings have relied on a collection of standout performances, ranging from the expected – such as Anze Kopitar, who has 17 points in the last 17 games – towards those gravitating towards the unsung.

One of the more unsung performers over the past month has been Alec Martinez, who has points in four straight games and 11 points, including six goals, in the last 13. Over the last eight games, Martinez has three goals, six points and a plus-3 rating while taking 15 shots on goal. His average ice time over that span is 16:26, which has lifted his season average up to 14:58.

“As long as he gets his shots and hits the nets, then he’s taking advantage of his skill set,” Darryl Sutter said.

Sutter also referenced young defenders Jake Muzzin, Slava Voynov and Drew Doughty, along with Martinez, as having a significant influence over the team’s postseason trajectory.

“I mean, any time we talk about a player that’s hot or a player that’s not, we’ve got Muzzin, Martinez, Voynov, Doughty, four guys with similar skill sets, that you need to be involved in the whole game for us, not just in the offensive part of it or the defensive part. They have to be involved in the whole game. It’s not one guy, it’s those four. We’ll go as those four go. For sure, we will. If they’re not consistent with their whole game, then we have a hard time. If they are, then we’re a better team. Clearly, it shows up.”

Alec Martinez, on if anything has changed in his play since the Olympic break:
I don’t know, I think I’ve just been able to kind of get in a rhythm. It’s a lot easier to, I guess just like anything in life, especially as an athlete you just get in a rhythm of playing in games. I guess when you’re in and out of the lineup sometimes, it’s the little plays that are harder or just when you’re coming back after the summer and things like that. It’s the little plays that are the tough one and at the end of the day these little ones are the ones that make the biggest difference. Just in a rhythm, but I think I’m the benefactor of the whole team playing well and guys making good plays. For whatever reason they’re just going in for me. I’m getting some bounces. I feel pretty good though.

Martinez, on improving the team’s play at home:
We’ve got what, eight games here, seven or eight games left. These are big points coming down the stretch here. In order to win, you have to play well at home and I think that we obviously want to bump that record up a little bit from what it has been this year. Regardless, home or away they’re a big two points every night from here on out.