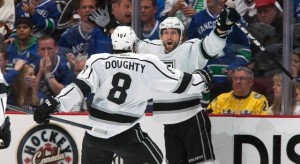 VANCOUVER, CANADA – APRIL 22: Jarret Stoll #28 of the Los Angeles Kings is congratulated by teammate Drew Doughty #8 after scoring the overtime winning goal during Game Five of the Western Conference Quarterfinals during the 2012 NHL Stanley Cup Playoffs at Rogers Arena on April 22, 2012 in Vancouver, British Columbia, Canada. Los Angeles won 2-1 in overtime and take the series 4-1. (Photo by Jeff Vinnick/NHLI via Getty Images)

By Zach Dooley
1,509 Comments
Off the Ice

By Zach Dooley
997 Comments
Behind the Scenes