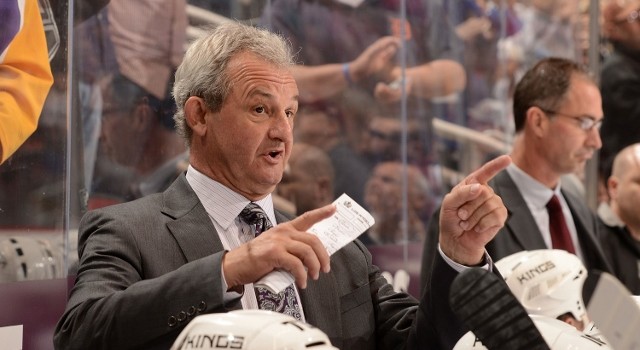 On Marian Gaborik:
He’s still finding his way. I mean, Kopi’s the key guy on that line. Gabby’s played fine. He’s been solid for us, had lots of opportunities, done a good job in his own zone. I think it is an adjustment for players that come from the east to the west, and even though he’s played there prior, it’s still a big adjustment.

On any certain plays to suggest what Anze Kopitar and Justin Williams have in Gaborik:
No, I’d say it’s the other way. [Reporter: The other way? Gaborik’s starting to see what he’s got with Kopitar and Williams?] As I said, Kopitar is the key guy there.

On any surprise over Craig Berube’s success with the Flyers:
No, he’s a natural leader. He was that as a player. If you look at his family background, in today’s game most of the coaches are like that in terms of teams being so young and teams being so close and their skill sets that guys like that generally have success. He’s a strong guy. Not cause we’re playing him tonight. He’s a strong guy and he was a captain, and if he was a player he’d be their captain.

On the biggest challenge posed by the Philadelphia Flyers:
We played ‘em a couple weeks ago at home. They beat us two-cop. Both teams played similar games. So we just kind of go off that, not so much lately. They just finished playing St. Louis, which is a team similar to us, and they handled them, so we know we’ve got our hands full. They’re deep. Heck, if you can play Vinny Lecavalier on left wing, you’re pretty deep down the middle.

On opening a “big” road trip after back-to-back wins:
It’s not that big. It’s a fast trip. It’s good. You get out here and you play three games. Everybody’s at this time of the year, other than the teams that have separated themselves as the top five teams, everybody else is in pretty much a playoff race. We don’t get too much ahead of ourselves in terms of the trip. We’re playing the Philadelphia Flyers tonight.