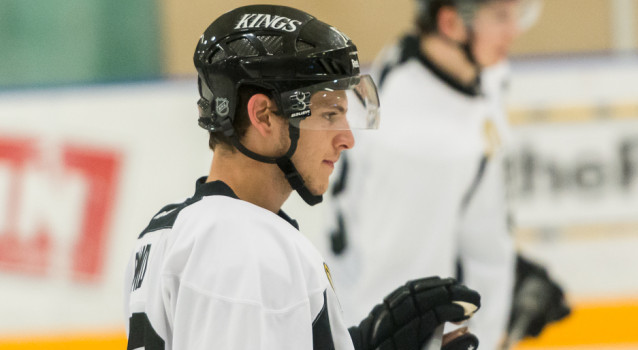 Nic Dowd’s bushy locks may be gone, but his production has remained constant.

Among the more consistent college players under the Kings’ umbrella, the formerly follicly endowed St. Cloud State senior forward scored 21 goals, posted his second consecutive 39-point season and was named as a Hobey Baker Award finalist on Thursday, one of 10 Division I players under consideration for the award presented to the player that demonstrates “contribution to the integrity of the team and outstanding skills in all phases of the game” as well as criteria based on strength of character and scholastic endeavors.

The winner will be selected from a group of three finalists by the Hobey Baker Memorial Award Selection Committee, comprised of coaches, officials, NHL scouts and print and electronic media. Fan voting is also weighed.

The 24-year-old two-way center served as St. Cloud’s captain in 2013-14 and will look to return the award to St. Cloud after his former Husky teammate Drew LeBlanc brought it to the central Minnesota campus of over 16,000 students for the first time in 2013.

A native of Huntsville, Alabama, Dowd didn’t receive the same level of coaching and preparation as many of his peers, and didn’t follow the most traditional path to getting drafted. Selected in the seventh round out of NAHL-Wenatchee in 2009, Dowd played an additional year of junior hockey before joining the St. Cloud program full-time in 2010. He opted to remain with the Huskies for his senior season last year instead of signing with Los Angeles.

“He really took his time to be a player,” Nelson Emerson, Player Development said. “A lot of time in today’s game, players really rush themselves, but Nic didn’t, and that’s OK. He wanted to make sure he’s ready physically, he’s ready mentally, and I think also going back to school for his senior year was real important for him. He’s taken the time to make sure he’s mature enough on both ways.”

A two-way center who led the Huskies with 21 goals, 10 power play goals and 32 penalty minutes, Dowd was won a pair of awards presented for the first time by the National Collegiate Hockey Conference: Defensive Forward of the Year and Scholar-Athlete of the Year. St. Cloud finished with a regular season-best 15-6-3 conference record in the first season of the NCHC following widespread realignment in Division I college hockey. Though Dowd and the top-seeded Huskies were swept in a best-of-three series by eighth-seeded Miami to open the NCHC tournament, they will face Notre Dame in the first round of the NCAA tournament in St. Paul next Saturday. The winner will advance to face the winner of top-seeded Minnesota and Robert Morris..

“He’s had a consistent college career, which is good. I think that’s a real positive,” Emerson said. “He does work at his game. I think he puts his own pressure on hismelf to be consistent, and I think it just showed when he went back for his senior year and he realized that he’s going to have to be a leader and his game was going to have to be at a certain level. He had a successful season and we’re really proud of him.

Dowd is one of three Kings prospects on St. Cloud, along with senior defenseman Kevin Gravel and sophomore forward Jonny Brodzinski, whose 39 points tied Dowd for the team lead.

“We’re pretty proud of all of them,” Emerson said. “They’ve all done well, all our seniors, really. [Wisconsin forward Michael] Mersch and Gravel – they’ve had real good years.”

Nelson Emerson, on the role Dowd could grow into:
Things change once you become a pro. But he’s a big enough player. We’ve asked him to work at his defensive game, and he has the last couple seasons. He’s strong enough that he can play, I think, on any line, and he has enough skill, obviously being a Hobey Baker finalist, where he has assets that he can produce as well. I think you can see him playing on any line. I think he can play all three forward positions. Now that he’s learning the defensive side of it, we’re pretty fired up about him in that regard as well, so it’s good.

Emerson, on Dowd’s path in hockey:
If you look at my track to being a pro, I was drafted as a Junior B player, and then I went back and played another year of Junior B and then played four years of college…So it’s OK that Nic has taken this progression. It’s not the way that everybody chooses to do it, but it’s worked for him. The fact that he’s a Hobey Baker finalst – this is what I say to Michael Mersch, too – when these guys chose to go back for their senior seasons, it’s difficult to play as a senior. You’ve got to push yourself, you’ve got to make sure every night, every weekend you’re up to playing to the top of your ability, and that’s hard in itself, and he fact that both of these players, Mersch and Dowd, have had successful years, it’s a testament to them to push themselves.