Dustin Brown plans to “play it by ear” tonight 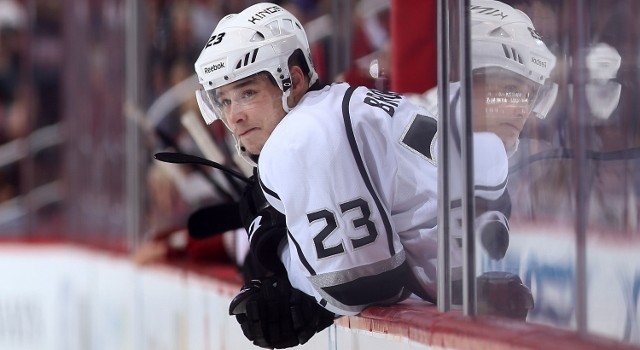 Dustin Brown did not take part in the Kings’ optional morning skate today as he recovers from what was acknowledged yesterday by Darryl Sutter to be an illness and as “more maintenance than anything else” by a member of the club’s hockey operations. A pair of tweets by The Fourth Period reporters Dennis Bernstein and David Pagnotta yesterday hinted that it may be something more serious and that Brown is unlikely to play tonight against the Anaheim Ducks.

When speaking with reporters late this morning, Brown didn’t offer a firm indication of his availability against the Ducks.

“Just kind of play it by ear. Getting back to square one, really. Just stayed in later for treatment, and see how I feel later,” he said, before acknowledging that he was under the weather.

“Tired. Got it from my kids,” Brown said.

Whether he began feeling ill against Toronto on Thursday, Brown answered, “Who knows?”

“Probably, at some point,” he continued. “Yesterday I felt it, and go from there.”

He noted that other than the illness, he feels fine physically, “for the most part.”

“I mean, no one’s a hundred percent this time of year, if you’re a winning team, at least,” he said.

Brown, who logged only 10:12 of ice time on Thursday – the third lowest total on the team – responded to Sutter’s verdict that his line played “tired” in the 3-2 loss to the Maple Leafs.

“I don’t know if ‘tired’ would be the right word I would use, but I thought coming out of break, we’ve been really, really good as a line. I think the last game wasn’t nearly as good as the previous games,” Brown said. “Once you kind of set that bar, you’re expected to do it every night, and that’s a good thing. I think that’s been a big part of our success as a team, and we’ve talked about it since the break, is getting contributions from everyone. Like I said, I think our line has been really good coming out of break, and last game we weren’t nearly as good. [Reporter: Your ice time personally was pretty low.] I’m aware. As a player, you’re not happy, but he’s the coach, I’m the player, and that’s how it works. [Reporter: Do you talk to him at all about it?] I mean, we discussed it briefly. But again, it was one of those things where as a player, I feel like I can contribute more, and he thought our line was not as good. It’s ultimately his call, and that’s how it works.”

Brown, who had previously established himself as one of the top penalty killers on what has emerged as one of the league’s most reliable penalty killing teams over the last three seasons, has logged only 22 seconds of shorthanded time since the Stadium Series game against Anaheim on January 25. He also spoke of his efforts to emerge once again as a preferred penalty killing option.

“Yeah, I mean, I’ve talked to Darryl previously about this,” Brown said.

“I haven’t had a very good year. I’m the first one to say that. I think, coming out of break, I’ve been playing a lot better, feeling a lot better. My mindset’s just different. Now it’s just about working my way back to where I’m capable of playing. Again, PK – I’ve always done PK. I’ve got to work my way back into it. It’s not a given that I’m going to be PK or power play. It’s about how you’re playing at the time, and this year I haven’t played very well, so I think that’s where I’m disappointed in myself. At the same time, it gives me an opportunity to kind of focus on certain things to be able to PK and be able to power play. As a player, you’ve just got to work through it.”

Brown, on whether he’s still wearing his knee brace:
No, I took it off. At the Olympics, actually, I started not wearing it. I didn’t feel comfortable with it. I never have, but it’s not an excuse. Like I said, we’ve been talking about my play for the first half of the year. People talk about the knee brace a lot. I just wasn’t ever comfortable with that. That’s not an excuse at all. I just feel better without it, and we’ll go from there.