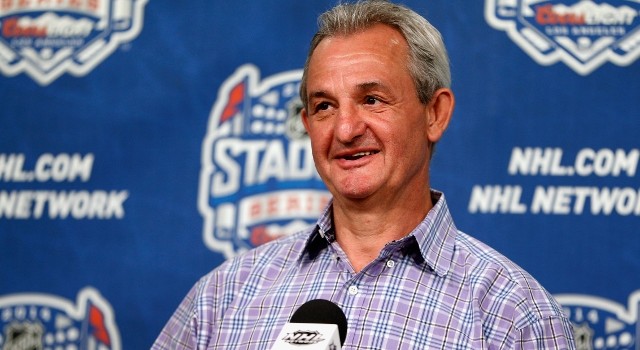 Darryl Sutter addressed several on-ice topics at yesterday’s practice, so when the time came for him to chat with the media assembled at Toyota Sports Center today, the discussion gravitated towards towards Legends Night. Sutter has previously discussed his admiration for the Kings’ “Forum Blue” jerseys and spoke warmly about the team honoring Ian Laperriere and Kelly Hrudey. On Thursday, he threw a few lighthearted chirps towards Jim Fox, who will be honored in tonight’s pregame ceremony.

On Jim Fox Legends Night:
I think that we do it three or four times a year, and I think the players are pretty familiar with Jim Foxy. He holds us up a lot, actually, getting on the airplane. He’ll hold us up tonight, too. [Reporter: Is he the last guy on the plane?] No. It’s that committee that he’s on there. They’re always a little late. [Reporter: Committee? What committee is that?] What’s that TV station that does our games? There’s like six of them…Jimmy’s around us all the time, so we’re familiar with him. Quite honest, I’ve enjoyed talking to the other guys that we’ve done because there are guys that I might have played against or coached against. It’s good to see them, see what they’re doing now.

On whether he likes the purple uniforms:
Yeah, I do. I like the gold ones, too. I really like the purple ones, and I know the players do, too. It’s fresh, and as the season goes along it’s nice to have different looks, I think. Quite honest, I think the fans enjoy seeing the jerseys, too. [Reporter: So did you tell Jim not to speak too long?]…Surely he won’t. I mean, he gets to say all he wants all the time. Right? It’ll be good for his family.

On Jonathan Bernier seizing the starting role with Toronto:
I think it was obvious to everybody in this organization that he was ready to do that and wanted to do that, and he’s doing that.