Vey assigned to Manchester due to cap considerations 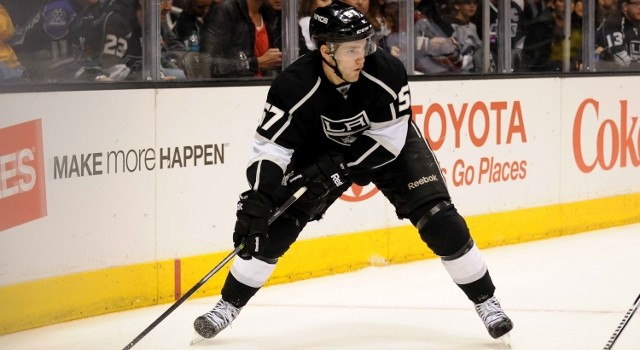 To remain salary cap compliant – even with the Blue Jackets retaining 50% of Marian Gaborik’s salary – the Kings assigned Linden Vey to AHL-Manchester on Wednesday. Dean Lombardi, who explained the move, indicated that this is a temporary move.

“The only reason Linden had to go is purely because of cap space. It wasn’t a roster issue, because at times I’ve had to move the kid down for the roster spot. It was purely because I was short. Even with Columbus taking 50% of Gaborik, I was short,” he said.

“I know that’s disappointing to him. It is to me, too, because I didn’t like sending him down, because it had nothing to do with hockey. That’s just the reality of it now, and as space builds up as time goes on, I’m going to bring him right back.”

In 18 games with the Kings, Vey had five assists and an even rating.

In the recent chat’s I had with Lombardi, he was very high on Vey, saying “You even see Linden, in the short time he’s out, he makes a lot of little plays. It doesn’t bring you out of your seat, but you’re keeping the puck. He gives the puck to a guy who can do something with it. He just doesn’t get rid of it and say, ‘You deal with it.’ And all three of them can do that, but they’re inexperienced.”