Though the 8:41 of ice time Linden Vey logged in last night’s 2-0 win at Calgary represented a season-low, the rookie who debuted on November 7 performed well in the limited opportunity.

The checking and neutral zone performances have been attributes of Vey’s play that the Kings been looking to accentuate. A skilled forward who has 145 points in 179 career American Hockey League games, the 22-year-old has provided an additional option on the penalty kill, an indication that he has developed well into his 200-foot game.

Of course, the ability to work well in all zones on the ice is a necessity when continuing to earn minutes on this Kings team, and there’s no better center in the Western Conference – other than perhaps Jonathan Toews – at utilizing offensive gifts while adhering to defensive responsibilities than Anze Kopitar.

“I think when you look at Kopi, obviously the reason why they’ve been so good over the last few years is because he’s so good in his own end really,” Vey said. “He doesn’t cheat on any pucks. He’s always in the right spot. He’s a guy you look at. He’s a top flight player and obviously a go-to guy offensively. He plays in all situations because he’s responsible and those are the guys you want to be like.”

Stevens also acknowledged that Kopitar’s 200-foot game is a fine model for Vey.

The Kings are 11-2-4 in the 17 games in which Vey, who has five assists, has been in the lineup this season.

Linden Vey, on the two wins coming out of the break:
Obviously it’s a good start. I think coming off the break it’s tough, but you win two road games, and we kind of grinded both of them out. The first one, we let up a few power play goals and we tightened up defensively in the second game. It’s good to get both wins in a row.

Vey, on the team’s performance in the third period against Calgary:
I think you obviously want to get better as the game is going. And I think for us, we want to focus on getting a little bit better starting – playing 60 minutes. Quickie was great for us last night, probably the reason why we won. It’s obviously a good sign when you find ways to win games.

Vey, on whether his confidence showed in Thursday’s win:
Yeah a little bit. I think offense is obviously a hard game when…you’re up and down levels. You don’t know exactly where you fit in, but I’m just trying to find ways to play my game, and hopefully we can keep getting better and better.

Vey, on the feedback from the coaching staff:
I just have to keep improving, I think. That’s part of being a pro – you have to keep getting better every game, every year and I’m obviously sure to sharpen up the own zone and keep playing.

John Stevens, on what Vey has to do to be successful at this level:
He’s here because we like what he’s done in the minors. I think he’s got a really high skill level and he’s got the ability to make plays, and we just want to see a real commitment to the defensive part of the game. We want that line to spend time in the offensive zone, and that all starts in our own end by being a good defender, a really good checker that allows him to have possession of the puck and go play in the offensive zone. First and foremost, we want to see a really accountable player as a checker, and secondly, do what he does well and play to his strengths with his skill level and ability to make plays.

Stevens, on his evaluation on the development of Vey’s 200-foot game:
Well, I think he’s gotten better. I think he’s gone down to the American League and has really worked at his game. I think the coach has done a good job down there bringing a real focus to that part of his game. Usually when it comes to players like that, it’s not an ability to play that way. It’s a willingness to play that way…It’s gotten to the point where we’re using him to kill penalties as well, which is usually an indication of the progress that he’s made, and it’s an area that he can really help us if he can be good in that area. The one area, I think, that every young player has to get better at when he gets to this level is just being better in the faceoff circle. It gets him on the ice more, and it really helps him play in situations that I’m sure he wants to play in. 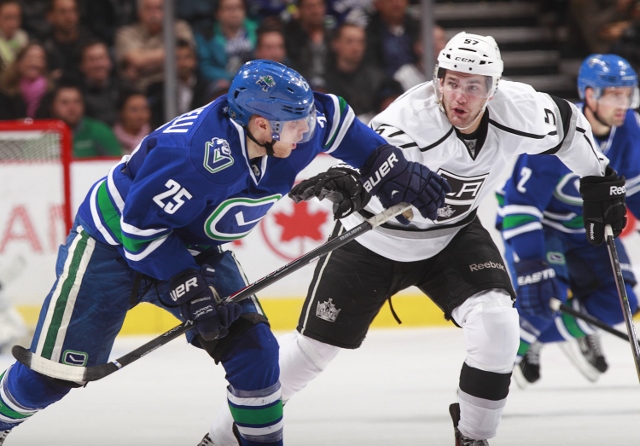