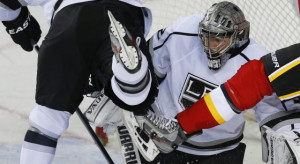 CALGARY, CANADA – FEBRUARY 27: Goalie Jonathan Quick of the Los Angeles Kings keeps his eye on the puck as skates fly in front of his face during the third period of their NHL hockey game at the Scotiabank Saddledome February 27, 2014 in Calgary, Alberta, Canada. (Photo by Todd Korol/Getty Images)

Insiders, a bit of schedule news for you, as we approach the three months out mark from training camp and

By Zach Dooley
661 Comments
Behind the Scenes