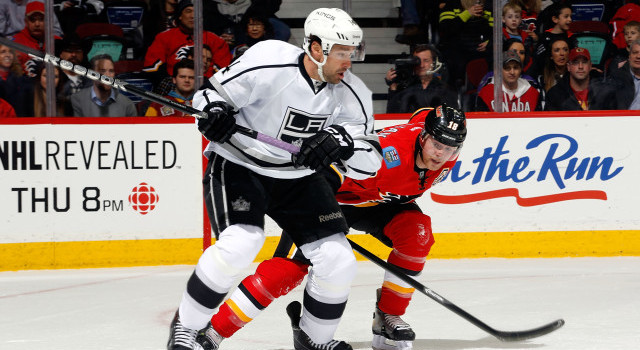 On the team’s American Olympians having a fine game:
They had a good Olympics, too. They make a big deal of it in the States because they don’t win a medal, but these guys all get to represent their countries, and the way they did it, especially our guys, they did an awesome job. So they came back in a good frame of mind.

On Brown’s goal:
Gio went over to Chris, and Chris tripped. [Didn’t get] the puck luck.

On whether Drew Doughty is one of the more underrated players in the league:
I don’t think he’s underrated. I mean, he gets nominated for a Norris, he gets All-Star votes, he gets to play in the team that just won the tournament. You know what? Drew – I’ve said this. Guys asked last week. You know what? We have to play him so much, just because we don’t have quite the balance on the defense that some teams have, so he plays more. I don’t think he’s an underrated player. I mean, he plays top-five minutes in the league, and he just finished a tournament where all seven defensemen were [in the] Western Conference. It’s a tough conference.

On the schedule:
It’s ridiculous, the schedule. We all love our players going to the Olympics and, quite honest, the players who don’t go like that break that they get. But it’s ridiculous. It’s almost unfair to the players, what they have to go through. We started with 23 in 46 games. Everybody was playing 20-something games in 40-something days. It’s not realistic to think that you’re going to be able to get the most out of them every night.

On building up a cushion on Vancouver:
There’s no cushion. You know what?…We have a 14-team conference, and there are 11 teams after tonight that are still legitimate playoff teams.

On what he liked about the third period:
I liked the entire game. You like when you win on the road. I mean, what are you not supposed to like about it? It’s a tough turnaround. You get in here at three in the morning. Some of you guys get to sleep all day.