BULLET POINTS: The Slovenians weathered a Swedish storm for a good 40 minutes before conceding four third period goals in a 5-0 loss that eliminated the Olympic longshot from the tournament. Slovenia goaltender Robert Kristan stopped 25 of 26 shots through two periods and allowed only an Alexander Steen power play goal late in the first period to give his team an opportunity to strike. Despite some good pressure midway through the first period and several flurries, the Slovenes were unable to solve Henrik Lundqvist, who stopped all 19 shots for his second shutout of the tournament. Carl Hagelin (two goals), Daniel Sedin and Loui Eriksson also scored for Sweden. The line of captain Tomaz Razingar, Marcel Rodman and Jan Urbas struggled in the quarterfinal, with each player posting a minus-3 rating.

KOPITAR: Anze Kopitar led Slovenia with 22:51 of ice time and finished with an even rating, though he was not credited with a shot on goal. The Kings star finished with three points in the tournament, which put him in a four-way tie for second place in team scoring with Jan Mursak, Jan Urbas and David Rodman. Ziga Jeglic’s four points (2-2=4) led Slovenia in the country’s first Olympic tournament. Kopitar’s average time on ice of 21:02 over five games led Slovenia.

THEIR WORDS: “It’s definitely a disappointing feeling right now. We felt that we could maybe surprise another team, but it didn’t happen today,” Anze Kopitar said, as reported by Shawn P. Roarke of NHL.com. “We’re very proud of this team. We’ve had a [heck] of a tournament, and we’ve got to be very happy with the results.”

Also from Roarke’s recap: “Our team got really tired as the game went on, so it was hard to play,” Slovenia forward Jan Mursak said. “The third period was a total disaster. I think the guys stopped playing while Sweden was just tighter all over the ice. There was nothing we could do.”

Slovenia can barely control the puck on a power play even though Anze Kopitar stayed out for the first 100 seconds of it.

Sweden’s Niklas Hjlamarsson: “We come over here to go for the gold and we’re giving ourselves a good opportunity.” #Blackhawks #Sochi2014

Anze Kopitar finishes at +4 with 0 EV goals against IN THE TOURNAMENT. He will now travel from Sochi to Ljubljana on the back of a lion.

Nobody should be more proud than anze kopitar. He was beast in this tournament in all 3 zones. He help for sure, but he was different level 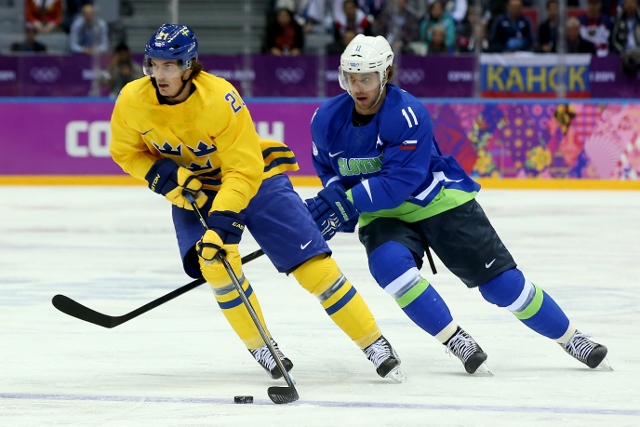