Brown, Blue Jackets at odds over hit on Murray 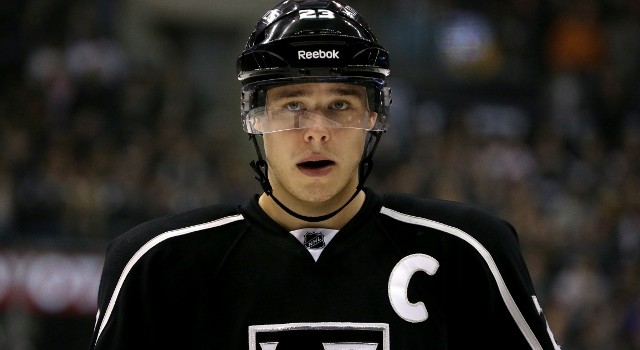 Dustin Brown was assessed a two minute charging minor for a heavy second period hit on Columbus defenseman Ryan Murray. The rookie wasn’t on the Blue Jackets’ bench to begin the third period but returned to action midway through the frame and eventually logged 12:05 of ice time.

Though Brown referenced the hit as being “fine,” the Blue Jackets Head Coach Todd Richards and forward Nick Foligno used the term “vulnerable” to describe Murray’s position when contact was made.

After the game, both teams shared their views of the collision.

Dustin Brown, on the hit:
It’s a fine hit for me. Whatever. At this point, I don’t know if we’re allowed to hit anymore. It’s just one of those plays where he kind of bails and I’m coming in for the hit. Whatever.

Brown, on whether “anything violent” is automatically called a penalty:
I think ultimately they’re going to go the way of the IIHF, where if it looks bad, it’s a penalty, and whether it’s a good hit or a clean hit or a hard hit, if it’s too hard, it’s going to be a penalty. I think that’s kind of where they’re going to be going. Like I said, I’m just not a fan. There’s some responsibility to protect yourself on the ice and responsibility on the other side of it. There’s certain hits I think we can all look at and say, ‘That’s not a good hit.’…It wasn’t like I targeted his head, or anything like that. It was a body check, and he happened to be a little lower than I am, so I don’t know what I’m supposed to do in that situation.

Todd Richards, on being worried about Ryan Murray’s return to the game:
Absolutely. We watched him get up off the bench and leave and the trainer says he has to go back and get checked out. Obviously you’re worried, and even though he came back, going forward, we never know what tomorrow morning is going to bring. We have to get on a plane and fly up there and you never know how he’s going to feel the next day. So, hopefully he’ll get through and wake up tomorrow, and he’ll feel fine.

Richards, on Dustin Brown’s hit on Ryan Murray:
The way that the game was going, I like the way that were playing, and the hit certainly stirred up a lot of emotion in me. The way that I saw it was our player was vulnerable. He was in a vulnerable position, distance travelled, he left his feet, and to me it looked like a forearm right to the chin. The primary point of contact was the head. I don’t know what else you have to do to get a five minute major, and the guy has done it before.

Nick Foligno, on Dustin Brown’s hit on Ryan Murray:
Obviously we didn’t like that hit on Ryan. I thought that he was in a pretty vulnerable situation and I didn’t like that he only got two minutes for that. But we rallied and it was an emotional part of the game and we rallied around it and continued to push and keep them at bay. That’s a hard hockey team. They play hard minutes and we were right there with them and just couldn’t find that OT goal.