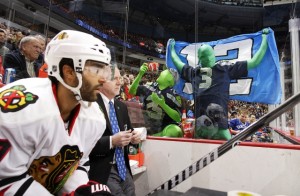 VANCOUVER, BC – JANUARY 29: The Green Men, two Vancouver fans, taunt Johnny Oduya #27 of the Chicago Blackhawks who took a penalty against the Vancouver Canucks during their NHL game at Rogers Arena January 29, 2014 in Vancouver, British Columbia, Canada. Chicago won 5-2. (Photo by Jeff Vinnick/NHLI via Getty Images)

By Zach Dooley
113 Comments
Behind the Scenes