Crosby more familiar with Los Angeles away from the season

For the amount of time he’s shown in nationally televised marquee match-ups, Sidney Crosby’s numbers against L.A. are lacking.

It’s not that he hasn’t produced when given the opportunity, it’s just that there haven’t been many opportunities.

The league’s alpha number one superstar has faced the Kings only three times amongst his 523 career games, in which he has scored 265 goals and recorded 739 points.

In those three games? One goal, four assists, five points.

These teams haven’t met since a 3-2 Penguins shootout win at Staples Center on November 5, 2011, a game Crosby missed with a concussion.

“I didn’t realize it was that long ago,” the Penguins center said. “I come out here a lot in the summer. So it doesn’t feel like it’s been that long. I skate here and spend some time here training, so it doesn’t feel like it’s been that long – but I guess now that you’ve told me that – it’s been a really long time. It’ll be good to get out there. I know they play a pretty tight style of game and don’t give up a lot, so it’ll be a good challenge for us and I think we probably need that type of tight game to play a certain way get a little bit better at managing the puck. So that’ll be good for us.”

Crosby, who can occasionally be spotted at informal Toyota Sports Center off-season skates, has spent the last three summers in West Los Angeles and Santa Monica beach neighborhoods – an off-season gravitation that began while he was a teenager playing for Rimouski Oceanic.

“I’ve kind of switched it up. I was in Santa Monica and Brentwood and I was in the Marina at one point. So that whole cluster there I think you don’t really have to leave,” he said. “It’s nice and it’s a great place to train. You know what you’re getting weather wise every day and I come out here and skate a lot. There’s a lot of guys out here so it’s worked out well.”

Does the game’s most gifted athlete get recognized in his summertime escapes?

“It’s pretty quiet,” he said before recalling the Summer of the Cup.

“I was out here the year that Scuds won here and couldn’t believe how many people were talking about hockey. It was big. Everywhere you went you heard about it. It was cool that way. You could see that hockey has grown out here. All the kids are playing it, but that being said – I think it’s definitely been somewhere that I can go to the grocery store and that kind of stuff.”

Sidney Crosby, on the new NHL schedule:
I like it. It’s nice to get to play different teams. You get those different match-ups and just preparing for who you’re going to play against, who you’re going against each night – I think it’s nice. I think it’s good for the fans to see different teams and for us to travel it’s a little tougher. So we get a taste of what the West is like and how difficult it is. We’ve had a couple trips now changing time zones like this and you definitely feel it when you get back. Definitely more appreciation for how good our travel was prior to this.

Crosby. on whether facing the same Eastern teams wears on him:
I don’t know if it’s so much the team you’re playing against, as far as just you’re preparing the same way. You’re playing those teams. You know how they play after a few games and it’s nice just to have to adjust and think a little bit different – not have to think the exact same way. You’re going against a different set of D-pairing and a different centerman who might do something a little different than the six times you play against the centerman for Philadelphia or New York. I think the matchup or that competitiveness – I think for everyone is just playing a team that throws a little something different at you. Getting to play in a different city, a different building – I think it keeps things a little more fresh.

Crosby, on Rob Scuderi rejoining Pittsburgh:
I think for a new guy he’s pretty comfortable, just because he’s pretty familiar with the guys, the coaching staff and stuff. So that helps. He’s been around for a while, so he’s got a lot of experience.

Crosby, on Scuderi’s leadership:
Partly what I was saying there was he’s comfortable. For a new guy, usually it takes a little bit of time to feel comfortable and getting to know guys, speaking up and things like that. I think that his experience shows right away when he comes here and he’s been a good voice to have back in the dressing room. And I think the experience on the ice too – even with his injury – I think he keeps the game pretty simple and really shows a lot of poise back there, especially on D.

Crosby, on Scuderi not really being a new guy:
No, but a new, old guy and pretty familiar with the system and everything too – but I think it worked out pretty well for him, making that adjustment. I think he’s pretty calm back there and keeps it simple and sometimes we need to simplify things a little bit. So it’s good to have him back there.

Crosby, on his own maturity:
Yeah, I think that’s all a part of it. You learn from other guys and I think you continue to learn as you get older and go through situations and meet different guys and play different teams – all that stuff. I think it all helps and you always want to learn. You always want to get better and I think I’ve always tried to keep that in mind every year.

Crosby, on Chris Kunitz being named to Team Canada:
It’s nice to share that with a teammate. We had a lot of guys that were kind of in the mix – being talked about. So I think you’re pulling for everyone and you want to see guys get rewarded for all their hard work. When you see it up close every day, I think you gain a lot more appreciation it. It was really nice to see Kunie be rewarded and make that team. I know it was something that he was thinking a lot as it got closer and everyone was talking about it. So I was glad to see him make the team.

Crosby, on the amount of throught he has given to the Olympics:
A little bit more now. Yeah, I think that as we get closer you’re starting to think about it more and more. It’s not a bad thing. I think you’re going out there and trying to make sure your game is where it needs to be – not only for your team but making sure you’re playing at the right level when you get there. So I think it’s a good thing. I think it makes everyone better, but it’s not something that I think should affect playing for us here.

Crosby, on how he feels physically:
I feel really good. No complaints at all there. I think coming into a lockout year last year probably helped a little bit. Just not having to come in and play a full year after missing that much time. I was kind of able to ease my way into it a bit more and get a regular summer and get ready for this season. I’m happy with the way I feel and just want to make sure I’m continuing down the same track here.

Crosby, on the extent of his experience on international ice:
Not much. I played probably three times – three different events on the big ice. There are things that it helps and things that you definitely have to adjust a little bit, but I think you kind of realize the foundation of your game. It’s not going to change no matter how big the ice is, but it’s good to know those little tendencies, those little things and try to remind myself about those things as we get closer. 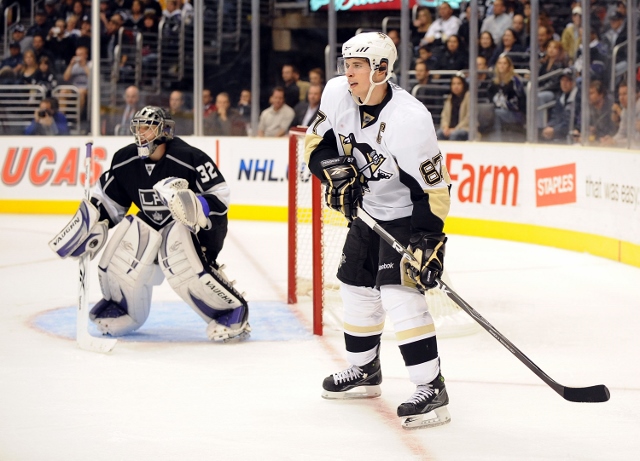