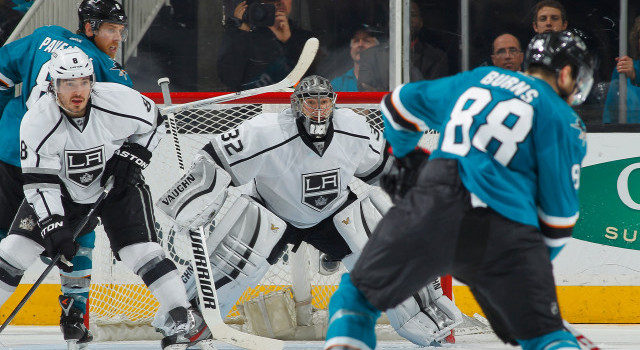 On if he felt like he had “take it upon himself” to lead the team to a win:
No. You prepare to stop everything every game. If you don’t think you’re going to stop everything every game, then you probably won’t last in this league very long. It was a good win. We had a couple PK’s where we had to dig in there. Kopi scores a beautiful goal there. That’s a huge win for us. In this building, they’re a great team at their own building. We got the two points and now we’re going to move on. We forget about it. We have a game tomorrow so we have to get ready for that.

On his glove save on Bracken Kearns in the first period:
It was a pass out. They had two guys in front. I didn’t know who the pass was intended for – I forgot who it was directly on the top of the crease there – and Kearns was a little further away. I don’t know if it rolled on him. It either rolled on him when he tried to shoot or he just made a pretty good fake. He got me to bite so you’re trying to reach out and cover as much net as you can and you get fortunate that it ends up in your glove.

On his defense:
We’re used to seeing that in the first 10 minutes in this building. They’re good at coming out and getting pucks on net early. So that’s not the typical game a goalie will see in this building. That’s a credit to the way the five guys played in front every time they were out there. At the end of the day it’s two points and we have to move on.

On his approach when the other team has six skaters on the ice and with a scrum in front:
You’re trying to find the puck, that’s it. Try to find it, stop it. I would say there’s always traffic. They throw two, three bodies in front and then you have a couple of your own bodies in front. So you’re just trying to fight through traffic and find the puck.

On his save at the end of the game:
Traffic – puck goes from one side to the other and it just hits you.

On whether the team needed to get a win:
As bad as we do every game we step out there. No game is more important than any other one. They’re all worth two points, so we have another tomorrow. Have to move on and get ready for that.