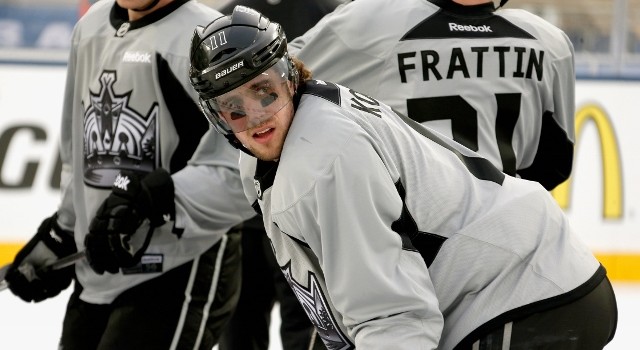 Before boarding the charter flight to San Jose, the Los Angeles Kings held an optional skate at Toyota Sports Center as they attempt to snap out of an 0-4-1 skid, the team’s second five-game losing streak in the last 30 days.

There’s a buzz term for teams that find themselves in similar predicaments –the ominous “closed door meeting.” It’s somewhat of a silly term – when are meetings ever “open door?” – as teams are constantly meeting, watching video and opening lines of communication in attempts to improve their standing.

Should the team hold a lengthier, closed door meeting? Anze Kopitar wasn’t keen on the idea.

“No, I think we’re an experienced team where we don’t necessarily have to have those meetings,” Anze Kopitar said. “I mean, everybody knows we’re going in the wrong direction right now, and that we have to turn it around. There’s no secret to it. It’s a matter of doing it. We can talk all we want behind closed doors with coaches, but ultimately when we step on the ice, we’ve got to get it done.”

Anze Kopitar, on the team’s recent stretch:
The streak is certainly not good, and we’ve got to snap out of it real quick. There’s no time for obviously milking it and time to figure stuff out. We’ve got to figure it out in a hurry. I thought last night was obviously a very cool experience. Minus the outcome, I think everybody had a lot of fun. It was new for a lot of guys that haven’t played outside yet, but this is now behind us, andnow we’ve got to look ahead and start collecting points again.

Dustin Brown, on the team’s recent stretch:
I think it comes down to bearing down on our chances and finding ways to score goals. I mean, last night we had some pretty good chances, and Hiller made some really good saves, and we also missed some opportunities. Other than the Columbus game, I think we’ve had those really good chances and haven’t really given up all that much. Teams have been finding ways to do what we do sometimes to other teams. That’s find timely goals and find one or two goals and shut the door. It’s about sticking together and just kind of the details of this all.