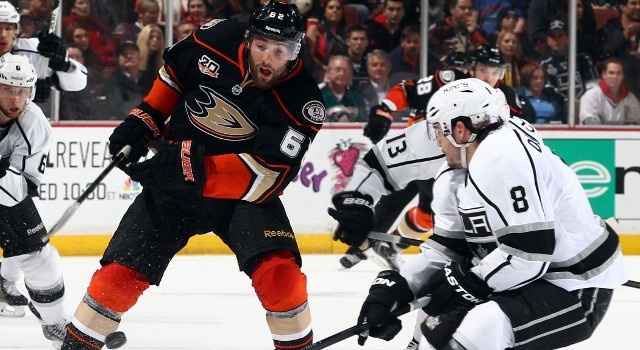 On whether he foresees any ice issues on Saturday:
It shouldn’t be, when you think about it. It’s not that big a deal. The temperature is very same as the building temperature. When you come in the building, it’s 65 and above. It actually might be cooler.

On the surroundings of the outdoor game:
I’ve played outdoor my whole life ever since I was a little boy…[Reporter: This is Southern California. It’s kind of different, huh?] It’s going to be awesome. I think I’ve answered that same question a million times already this year. Once when they put it in place. We’ll be fine. I think everybody’s looking forward to it.

On the Dwight King-Anze Kopitar-Trevor Lewis line:
They were very effective, weren’t they? [Reporter: What was behind the decision to put them together?] Trying to get spread out a little bit. Kopi’s been pretty much carrying a lot of the load. Get two guys with him that forecheck a little bit more, and that’s what Kinger and Lewie did. Heck, they scored a goal. I mean, ‘behind it?’ You’re trying to get some guys to score goals.

On Trevor Lewis:
I mean, he’s got some confidence in his game. He’s been good on this trip forechecking. We’ll see.

On whether the Kings and Ducks are evenly matched teams:
Right now it’s not because it’s hard to tell who their third and fourth lines are. Look at the difference. Tonight – who scored the winning goal for them? [Reporter: Bonino’s a pretty good player.] That was pretty effective. It doesn’t matter. I mean, you’ve got to be able to spread it out, and at the same time you’ve got to be able to at least saw it off, and that’s two games in a row where the kids on our fourth line got scored against, and they’re big goals. On road, it’s such a fine line.