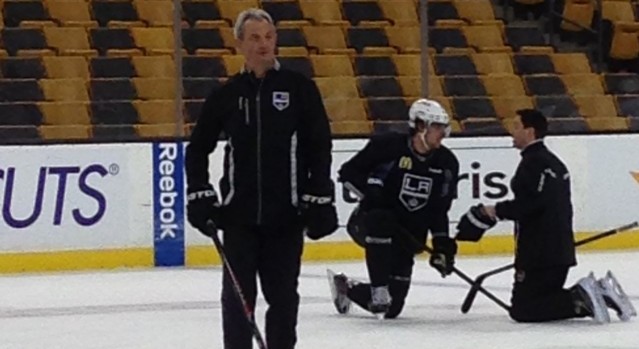 With the Kings holding a 1:00 p.m. practice at the TD Garden in Boston on Sunday afternoon, several journalists covering the Manchester Monarchs made the hour-long drive south to ask questions about the Kings’ developmental process and the assignment of Tyler Toffoli to the American Hockey League one week prior.

Darryl Sutter indicated that he hadn’t spoken with Toffoli since the player rejoined the Monarchs. After beind held scoreless while posting a minus-two performance during a 4-1 loss at St. John’s in his first game back, Toffoli erupted for a natural hat trick in a 6-0 win last night that culminated with a multiple fight situation and a near goalie fight in the game’s final minutes.

Sutter spoke with the media following the team’s full practice on Sunday.

On finding a spot for younger players:
We can only have 23 guys here. You can only dress 12 forwards, and then it becomes even tighter for players like that…He’s probably just one of 10, not one of 12, to get into the lineup and play where he’s got to play. This is different than any other league in the fact that you’re not playing 19 to 20 year olds against 20 year olds. If I know you have a weakness, I’m playing somebody better than you against you, because we have a chance at beating you. I’m not watching to see if you’re developing. You’re not developing during a game.

On following the Monarchs closely:
We have so much – we almost have too much in terms of watching, quite honest. I mean, you get every game on earth now. It’s a little bit of overkill, to tell you the truth.

On Tyler Toffoli’s 200-foot game:
Well, when you break 200 feet down, there’s lots of times where it’s about inches and being able to hang on to pucks in areas and get pucks out. If you’re playing the Boston Bruins tomorrow, and you’re a right winger like Tyler Toffoli, and Jarome’s coming down the wall on you, can you protect the puck, or can you not protect it? Can you make a play there? Do you know he’s going to thump you? Stuff like that. You’re not quite getting what I’m saying about the 200-feet part. There’s lots of small parts of the game where you have to excel. You have to excel at the whole part of the game. You don’t always have the puck. If he’s such a great goal scorer, then he’d have the puck all the time. And, really, he’s a guy that gets the puck and shoots and scores. But you’ve got to put yourself in that position, and in the NHL, you don’t get much room. You’ve got to get into those tough areas, not just Tyler Toffoli, but everybody. Every goal that’s scored now is from the top of the circles in. There’s nothing from the blue line. In fact, there’s goals now that are even scored from up in the mesh.

On “bright futures” for Tanner Pearson, Linden Vey and Toffoli:
If they continue to work. I’m not too caught up in it. If they continue to work, then they’re going to have good careers. You know a good lesson for all them young guys? I understand why you’re doing it. That’s all I’ve heard, quite honest, for the last year and a half, is those three guys, right? Well, big deal. Dwight King is a complete player. How long did he play in the American Hockey League? And you look at a guy like Cliffy, who’s struggling now, he didn’t probably play enough time in the American Hockey League, right? He didn’t play enough time, and now he’s in his third year, and probably his best year as an NHLer was his first year. Now he’s in his third or fourth year, and we’re trying to reach that Cliffy. So it’s valuable.

On watching Dwight King and Jordan Nolan when visiting Manchester in 2011-12:
We weren’t a very good team here for the way the game was going. We had some…guys that couldn’t play the type of game that we needed to play to be successful, and you’re trying to see if there’s anybody that can do that. Hey, I went down there because there was a break. I went down there because I had never seen any of those guys. I didn’t go down there to see if anybody was ready. I went down there to meet kids. So if you remember, our team was not in a playoff spot. Our time was having a hard time not just playing the game, but learning how to handle the whole thing – the lifestyle. Those kids got an opportunity, and they sort of rode that wave a little bit. Hey, look at both of them, Kinger and Noley. They’ve only played a handful of games in the NHL, and quite honest, last year was their second year. They played just about the very same amount of games. 40-something games, 40-something games. So you know what? They’re kids.

On what allows the Kings to move on quickly following wins and losses:
Well, there’s 82 games in your schedule. It doesn’t do much good to dwell on good or bad, does it? It’s just what we do in the room is nobody else’s business. We don’t have to talk about it. If somebody had a rough night last night, that’s the way it goes. [Reporter: But for a team that is young, does it impress you, their ability to move on so quickly?] They’ve had to learn how to do that…They couldn’t do it, or wouldn’t.

On his Boston Garden memories:
Well, I played in basically the same building, Chicago Stadium. [Reporter: Was it that similar?] The big thing was ice size. You talked about 10 or 15 feet difference. That’s what was unique. [Reporter: You ever see any rats?] No. Tough rink. It wasn’t for boys, it was for men. Chicago Stadium, Boston Garden. 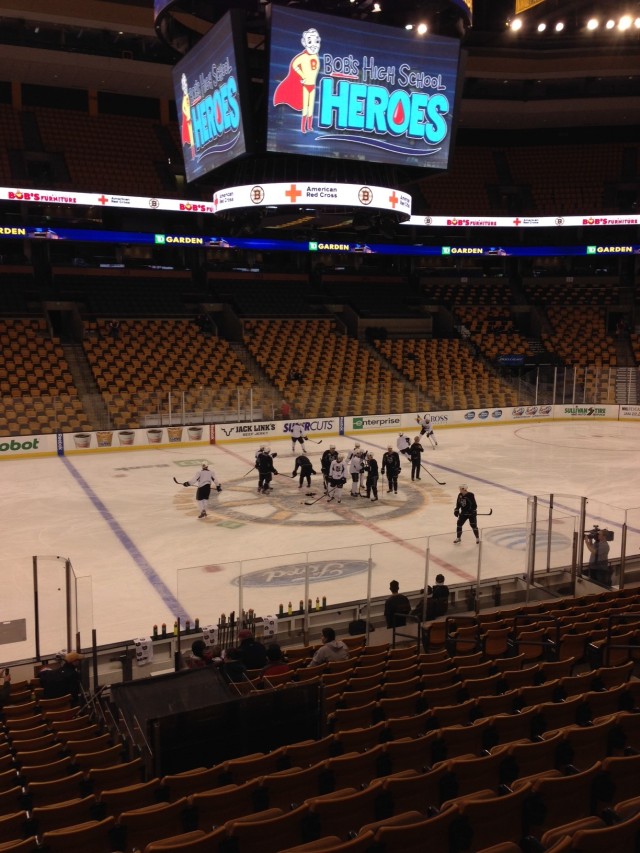