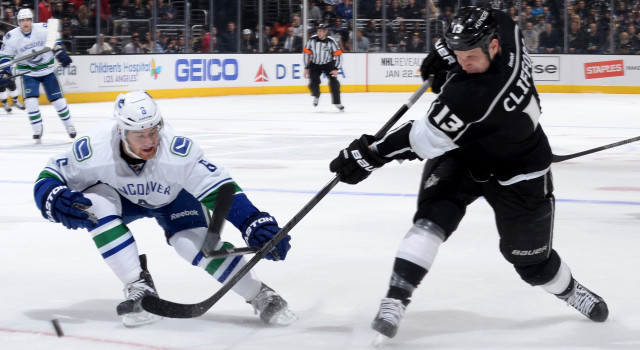 On whether the game was “chippier” than usual:
No, not really. Obviously their mindset was to come out and did what they did early in the game and get through it and carry on. [Reporter: Was it a Hollywood script because of who scored your goal tonight, and the way they were obviously attacking Dustin throughout the night?] Well, when the schedule’s as tough as it is, it’s not good when you have guys go to the dressing room or sit in your penalty box. You can’t play the game like that now. It’s simple.

On playing Dustin Brown with Anze Kopitar and Jeff Carter late in the game:
I did it off and on during the game, and then we shortened our bench. Kinger hasn’t been very sharp, and Brownie was.

On an update on Matt Greene, who “didn’t finish the game”:
He did not finish the game. [Reporter: No update.] I had just seen him, literally, I walked in here, and he was walking out. That’s the update. [Reporter: Was it injury or coach’s decision?] He wasn’t on the bench. You think I told him to go to the dressing room? He got in a fight and didn’t come back. I mean, that’s what I saw. I saw the same thing you guys did, and that was the last time I saw him, and then I just saw him with his street clothes, like, literally a minute ago.

On whether the power play and shot totals were disappointing:
That’s not disappointing. We’ve had 40-something shots three of the last five games, so we decided…the last two days that we were not going to take [any] shots. We were only going to practice running the goalie, because we had to do a better job because they said that’s what we do, so we had to do a better job. But we forgot to shoot the puck while we were doing that. Brownie…he scored the goal tonight? Like, last game – that’s incredible. That was like Bobby Orr, and one of the stewards of the game said that if you look at the replay and you stop it a hundred times, Brownie scored on a rebound off their goalie, got hit, jumped in the air, tried to avoid the goalie, but while he was doing it he ran the goalie. So he scored a goal, jumped in the air. It’s like Bobby Orr against Glenn Hall. So we’ve got to practice that more…It’d be a big fun drill to [practice].

On whether he’s proud of his team’s performance:
You know, you’ve got to get through it. It was…like 22 minutes, or 21 and a half – something like that – of special teams, which is not a normal situation.[Reporter: Especially one-nothing, too, right, to end up in a game like this?] Hey, we’ve played these guys…four times. Both teams are fighting for the same spot, which right now is somewhere between third in your division or a wild card spot, and that’s a fact. That’s what teams are going to fight for.

On how this sets up the “Grammy Trip”:
My what? [Reporter: Grammy trip. The trip during the Grammys when they close the building.] Oh. I was thinking about my grammy…That’s what the grandchildren call my wife, is ‘Grammy.’ [Reporter: Good set up for your trip, though, this win?] Well, like tonight we played teams – St. Louis, Boston, Detroit – so like tonight’s game, other than Columbus, they’re all three teams that we just finished playing. That’s kind of how the schedule’s been this year. You play those teams from the east sort of close together. [Reporter: Does it help the fact that you just played ‘em from a scouting standpoint?] St. Louis? [Reporter: Any of them.] Not really. St. Louis beat us five-nothing, so we have to get that touchdown early on ‘em. Get it out of the way early in the game. [Reporter: You looking forward to the trip?] It’s still a few days away. I’m not even thinking about that. [Reporter: Looking forward to the championship Sunday football games?] Yeah, it’ll be good. See the two west coast teams and the big quarterback teams.