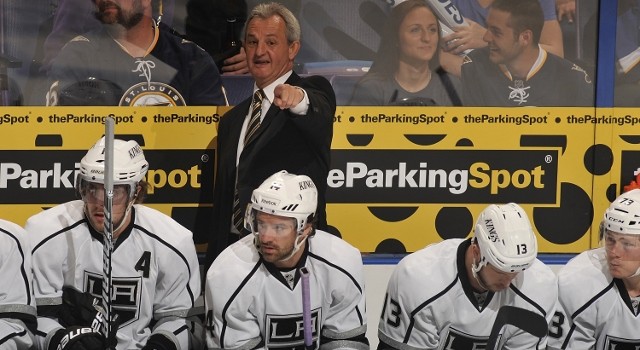 On a game featuring two top defensive teams:
We were able to score the second goal. Early in the second period Willie scores the power play goal. It gives you a two-goal lead

On Jeff Carter registering six shots on goal in the first period:
I think he had probably seven or eight good opportunities. He pretty much gives it to us every night

On scoring goals off rushes against a strong defensive team:
It’s just what I said. Jeff scored a big goal. Kopi forces a guy on his backhand, turns the puck over, and Justin Williams scores a power play goal in the first minute of the second period.

On the team’s 13-2-2 record against the Eastern Conference:
Well, we haven’t played ‘em all yet. We still get some [teams] in their buildings.

On asking for more from depth players, and getting a goal from Alec Martinez:
Marty played good. It’s a faceoff goal, right? Richards wins that draw, and it goes Regehr-Martinez. Forwards win the race to the net and the goalie doesn’t see it. Brown’s goal was Jarret Stoll wins a faceoff, and Justin Williams makes a good play.

On what he liked most about his team’s performance:
It’s what I said the other tonight. We’re playing good. We’ve played good for six or seven games. We’ve got five of the last six points. We had a little bit of breathing room in terms of not having to protect a one-goal lead.

On whether he’ll wear the boots presented to him in the pre-game ceremony behind the bench:
Aw, hell. I thought I was going to get a tractor. [Reporter: That’s 2,000 games.] I’m over 2,000. Easily over that.

On the importance of scoring the game’s first goal:
You know what? The league is teams that score first. It’s tough to chase leads. Teams are too close.

On facing the Detroit Red Wings on Saturday:
We practice tomorrow.