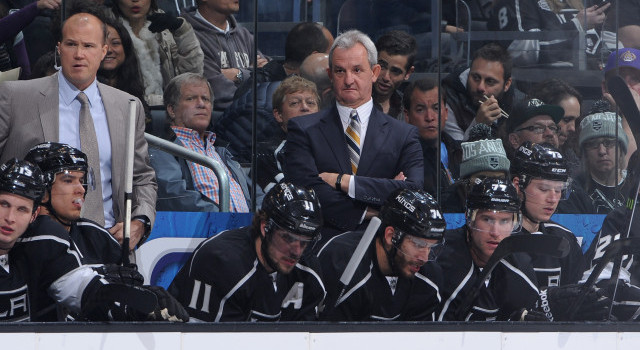 On Jonathan Quick’s play after missing nearly two months:
Yeah, he was sharp. You know what? He was going to play last night and tonight or last night and tomorrow [with] Manch, and then I wasn’t crazy about it because he was going to have to fly all-day Monday to play Tuesday, and I really didn’t like that. So once he got weathered out, I just talked to him after St. Louis, and he said he’d be ready. [Reporter: So you made the decision before today?] Mm hmm. Once he was weathered out and he was coming home with us, and he was going to play games there, so that meant he was ready to play. [Reporter: Do you take it easy with him now?] We don’t play ‘til Tuesday anyways, so I don’t make that decision until…I hadn’t even thought about it. I just asked him how he felt, and he said he felt good.

On the narrow balance between winning and losing recently:
Well, if you do it statistically, look at the last game we played. We lost five-nothing, but we felt we deserved a better fate. So, you know what? We just have to stay the course. It’s hard to score. You look at Vancouver and Los Angeles, both teams have really had a tough time scoring. They both work really hard and do all that stuff. So, you’ve just got to stay with it. There’s two or three teams that have a higher offensive capability than we do, so you know what? We don’t concern ourselves with that. We concernourselves with trying to do everything right, and play a 20-foot game, and we’ve been doing that, so tonight we finally got it back.

On the importance of a productive Dustin Brown:
I would say all of our players are really important, not just Dustin Brown. In terms of our offense, if you look at why we’re not in the top group in terms of scoring or offense, you know what? It’s not that there’s not enough of it. It’s not just Brownie. Obviously he’s got to score, but there are a lot of guys who have got to score for us.

On how difficult it is to scratch Matt Greene:
It’s tough. Hey, you guys know how I feel. I’ve said this over and over and over I wish I could dress everybody, but at the same time our defense hasn’t been playing very well. It’s like when Marty sits out, when I don’t play Marty, it’s the same thing. It’s not an indictment on the player. It’s more we’re trying to find something that works, and with the heavy schedule, Robyn, Greener – they haven’t had any break in it.

On Alec Martinez’s performance:
I haven’t really looked at minutes or broke it out, but you know what? He’s a young guy, and he just turned, what, 26 in July? So when you come out of [being a healthy scratch], and he has to step in, you’ve got to give us some juice.

On Vancouver’s struggles against the California teams:
I’ve never really looked at it like that. I mean, we’re all in the same division now. I mean, look how close it is.

On any special plans to celebrate his 1,000th game as coach:
Yeah, all that is is a friggin’ warranty run-out. That’s not it. It’s probably like 2,000 to tell you the truth, really, when you look at it. I mean, they make a big deal out of it because it’s a stat, right? It’s a history stat, if they look at it. But to me, it’s way more important the number of playoff games that you’ve coached than guys who have coached a thousand games in the regular season, and quite honest, if you look at it, I’ve been an assistant coach, associate coach, general manager, player, there’s way more than a thousand. All them friggin’ lockouts, all those games. I tell the players, you know what? When you’re far enough along, all a thousand games is is it tells you that you’re far enough along that you’ve had some success, and then you can have some selection if you want to coach. It’s not like a job, and if you look at with me, it’s like a sabbatical, and then it’s a friggin’ mission, and then it’s a sabbatical, and then it’s a mission. So as long as you enjoy it and you get kids like that in there, the thousand games, the more I look at it, I think more about what your family sacrificed than what I have, that’s for sure.

On whether he still enjoys coaching:
Absolutely. I don’t have to coach, right? You only have one kick at the cat. You’re trying to win. What’s wrong? And that’s true with the warranty. You don’t have to go buy a brand new truck. Why don’t you buy one that’s had good maintenance, a hundred thousand miles run off of it already? It’s still good. Take care of it. Take care of the engine.