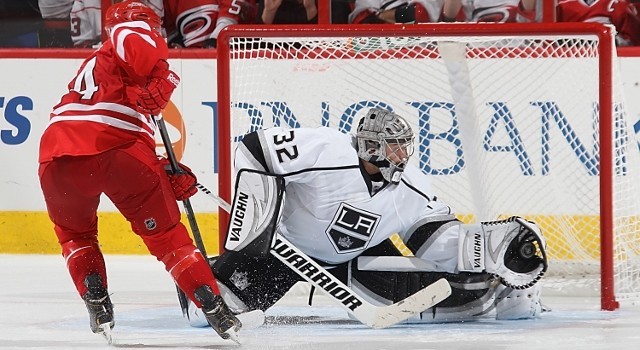 Though the plan for Jonathan Quick to travel with the Manchester Monarchs this weekend was dashed by winter storms that delayed and canceled flights throughout the eastern part of the country, the Kings goaltender is ready to participate in live game action and appears to be nearing his return to the active lineup. The 27-year-old suffered a Grade 2 groin strain in overtime of a 3-2 shootout loss to Buffalo on November 12.

“I feel good. I think the next step is to get some game action. I think that’d be the next step. So it’s up to the coaches, trainers to decide when they want me to take that step,” Quick said following the team’s practice at Toyota Sports Center on Friday.

The original plan, according to coach Darryl Sutter, was for Quick to play in two of three Manchester games this weekend. Prior to the winter storms, he would have traveled to meet the team in Binghamton, New York for tonight’s Monarchs-Senators AHL game before deciding whether he wanted to play on Saturday at Wilkes-Barre/Scranton or on Sunday at Hershey.

“I wasn’t really crazy about that to be quite honest…because first off, he was going to fly all-day Monday, which would’ve taken him out of the equation Tuesday. So…you’re almost losing another week on him,” Sutter said. “It was kind of his call if he wanted to, and what games he wanted to play. Obviously that didn’t happen, so now we just try and get him game ready for doing this.”

Because of those travel complications, Quick traveled with the team back to Los Angeles following Thursday’s loss to the St. Louis Blues and participated in practice with the team Friday morning.

The Kings’ plans for Quick will apparently not include the team’s ECHL affiliate in Ontario, California. According to general manager Dean Lombardi, Quick will not take part in the Reign’s home game on Sunday against the San Francisco Bulls.

“I’m iffy on sending that player. I think it still has to be their choice, clearly,” Sutter said. “It’s different if you’re not a top player, but I don’t know if you’re getting game ready when you’re an elite player by doing it. I think if you’re a guy that’s fighting for your spot, it’s different. That’s kind of as far as I’ve gone, quite honest…Obviously the next part is not my part of it – it’s the business part of it. There’s not going to be three goalies, or there’s not going to be all the players that are here.”

Quick traveled and practiced with the team during the recent four-game road trip through Nashville, Chicago, Dallas and St. Louis. Acknowledging that he feels normal and is not dealing with any pain, the current plan appears as though he’ll look to play himself back into live game action during the club’s upcoming five-game homestand, which opens Saturday night against the Vancouver Canucks.

“I want to play a game. So wherever they want me to play, I’ll play,” he said.